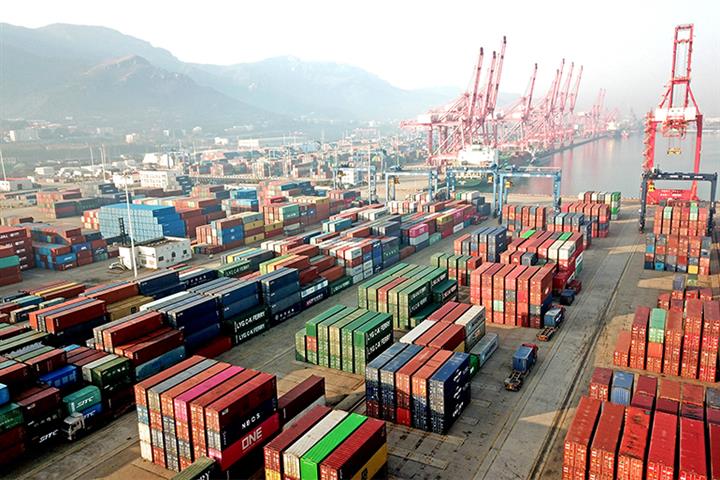 (Yicai Global) Dec. 7 -- China’s trade surplus shrank 3.4 percent to USD71.7 billion last month from a year earlier as imports rose, according to official data. That was less than the USD82.2 billion predicted by chief economists polled by Yicai Global.

Trade rose 26.1 percent to USD579.3 billion in November, according to figures released by the General Administration of Customs yesterday. Exports rose 22 percent to USD325.5 billion, while imports jumped 31.7 percent to USD253.8 billion. The surveyed economists had expected exports to grow by 17.9 percent and imports by 20.1 percent.

Imports from the US jumped 28.3 percent to USD16.8 billion from a year ago, while those from ASEAN gained 27.9 percent to USD38.5 billion.

The global economy continued to recover and the Commodity Research Bureau Futures Price Index soared to the fifth-highest level recorded, supporting growth in China’s trade volume and the value of that trade, Zheng said.

From January to November, China’s trade surplus climbed 29.8 percent to USD581.7 billion from the same period last year. Trade jumped 31.3 percent to USD5.5 trillion, as exports and imports stood at USD3 trillion and USD2.4 trillion, up 31.1 percent and 31.4 percent, respectively.

Imports and exports to and from major trading partners all increased in the 11 months. ASEAN was China’s largest trading partner at USD789.5 billion, up 29.8 percent from a year ago. The European Union ranked second with a 29.2 percent gain to USD747.6 billion, followed by the US with USD682.3 billion, up 30.2 percent.

China exported USD1.8 trillion of mechanical and electrical products in the 11 months, up 30.4 percent from the same period last year.

China played its original advantage in exporting such goods, strengthened the market, and expanded exports under the impact of the Covid-19 pandemic, said Huo Jianguo, vice chairman of the China Society for World Trade Organization Studies.