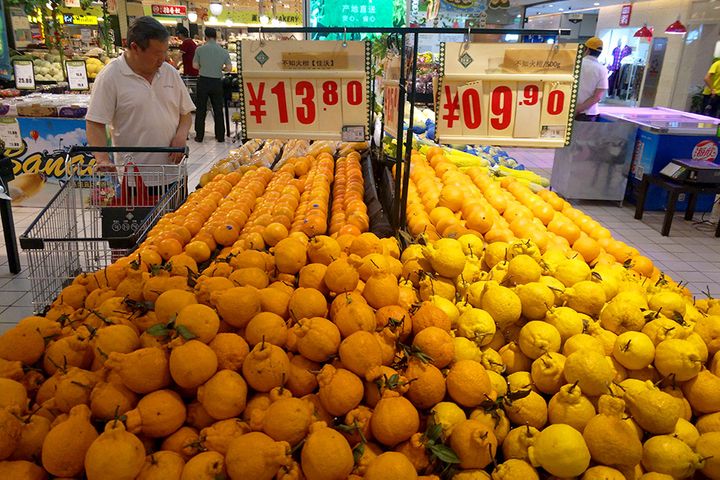 The falling cost of fruit and vegetables signals a good summer harvest and stable agricultural output, said Yue Xiuhu, director of the National Development and Reform Commission's Price Department, according to a report by broadcaster CCTV today. The main factors affecting prices are structural, he added.

Last month, the cost of fresh fruit jumped more than 39 percent, adding about 0.63 percentage point to the Consumer Price Index, while meat rose 18.2 percent, pushing the CPI up by around 0.75 point, official data show.

Yue said local governments have rolled out a set of policies that includes money to revive pig farms and big agricultural holdings and expand production capacity, while guiding chicken breeders, among others, to boost output of alternative meats to pork. The nation's pig herds have been devastated by African swine fever.

Broiler numbers rose at an annualized clip of almost 16 percent in the first half of this year, according to official data. Cattle and sheep herds also swelled significantly, with the entire meat supply generally stable.

In addition, 29 provinces have been providing more than CNY2 billion (USD283 million) in temporary assistance to over 80 million citizens since April, Yue said. If price hikes continue, the level of aid will rise accordingly.

An abundance of seasonal fruits has depressed fruit prices since last month. The average retail cost of apples, oranges, pears, watermelons and bananas was 6.7 percent lower at CNY6 per catty, a Chinese measure of about 500 grams, early this month from the first half of July. Apples began to fall, and prices of watermelons and pears dropped 19.3 percent and 20.3 percent, respectively.

Output in the main apple and pear-producing regions is very good this year, and the harvest is in sight, Yue said, so prices are expected to fall even further.

The mass of vegetables on the market has also brought their prices down significantly. The average for 15 kinds of vegetables fell back to CNY3 per catty early this month, according to the monitoring data of 36 large and mid-sized cities. That's nearly 30 percent lower than the mid-February high.