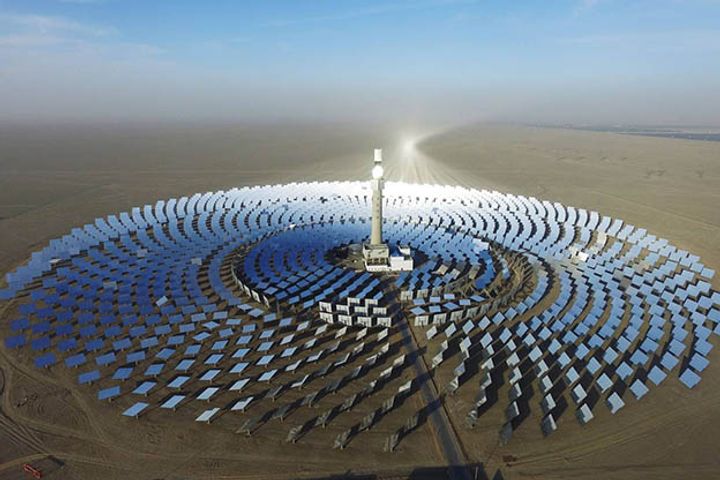 (Yicai Global) Oct. 11 -- China has become the eighth country worldwide to prove its knowledge of concentrated solar technology after a 200 megawatt-hour solar thermal plant entered operation in the country's northwest.

The plant, which will be used as a domestic demonstration for the technology, will span nearly 2.5 square kilometers in the Gobi Desert in Qinghai province, the operator, a subsidiary under China General Nuclear Power, said in a statement yesterday. It has a 50 megawatt capacity and includes solar island collectors, heat conduction and steam generation system, heat storage islands and power generation islands.

The facility is the first of 20 solar thermal power plants that the National Energy Administration plans to initiate in Qinghai, Gansu and other western provinces. It is also the only one connected to the grid and the first to receive a low-interest loan from the Asian Development Bank, in which China is the largest borrowing shareholder with a 6.4 percent stake.

Construction of the plant's main body began in August 2015 and is expected to generate as much power as 60,000 tons of coal burning every year. It should also produce 100,000 fewer tons of carbon dioxide and other gas emissions, equivalent to 4,200 acres of afforestation.

Concentrated solar power uses mirrors and lenses to focus large areas of light into a smaller area, and the plant's solar island collector houses 250,000 mirrors covering 620,000 square meters as well as a 110,000 meter vacuum collector and a tracking drive. The device tracks the sun's rotation so it can continuously reflect solar rays and guide them into a central receiver, where water is heated to produce steam and power a turbine to generate electricity.

The facility also houses the largest molten salt storage tank in Asia, with a 42 meter diameter. When sunlight is inadequate, the storage island can produce power to enable 24-hour generation and ensure power grid stability.