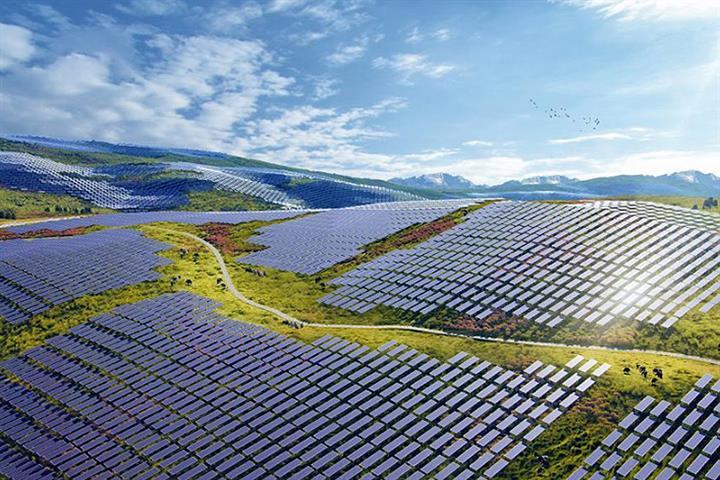 (Yicai Global) Oct. 16 -- China’s photovoltaic sector has weathered EU and US sanctions over the past decade and emerged stronger with increased capacity and better technology. Now the industry is facing fresh challenges from the soaring price of raw materials and escalating regional trade frictions.

Ten years ago, most Chinese photovoltaic companies made downstream PV products, whose value is relatively low. The production of upstream crystalline silicon materials was monopolized by seven companies from Europe, North America and Japan, which accounted for over 70 percent of global supply.

However, crisis struck in October 2011, when Germany’s biggest solar company at the time, SolarWorld, filed for an ‘anti-dumping and anti-subsidy’ investigation targeting 75 Chinese solar firms to the US Department of Commerce. The European market thus shut its door on China’s PV sector.

“At that time, the market swiftly shrank, overseas demand plunged and the solar sector encountered a ‘meltdown,’ with the price of raw materials in freefall and customers cancelling orders,” Xia Jiaxi, vice president of Wuxi Sunket New Energy Technology, told Yicai Global. “One feature of the PV industry is high, early-stage costs, which includes investment in equipment and workers. Companies that could not carry on were forced to sell their machinery and shut down plants.”

To get out of such dire straits, some Chinese PV firms started to focus more on technological research. Longi Green Energy Technology began to scrutinize the costs and performance of its technology roadmap from 2006 and subsequently shifted to monocrystalline tech, said Li Zhenguo, founder and president of the world’s leading PV company. The firm started to produce its own monocrystalline silicon modules and increase the capacity.

China overtook Germany to become the world’s largest PV market in 2013 with a newly installed capacity of 10.95 gigawatts. And it has remained the world’s top market for the past nine consecutive years.

When the EU ended its anti-dumping and anti-subsidy sanctions against Chinese PV products in 2018, it opened the door for Chinese solar firms to start exploring overseas markets again and to gain access to the European market.

However, despite the green transition by many of the world’s economies, Chinese solar firms are still challenged by the soaring price of raw materials and intensifying regional trade frictions.

“The recent hikes in the price of raw materials is the result of short-term capacity adjustments and self-optimization of the industrial chain,” Li said. The distribution of silicon wafers and panels in the market is not ideal and needs to be adjusted by the market, he added.

Seventy percent of the company’s revenue has come from overseas in the past few years, an executive at Trina Solar told Yicai Global. As a PV panel maker, the company is making efforts to cope with the difficulties in the external trade environment. For example, the company will focus on the tracing of sources, keeping all records, so as to offer complete evidence should there be an investigation.

“We are also strategically positioning our capacity and plan to construct silicon wafer facilities in Southeast Asia to cope with possible future trade risks,” he added.