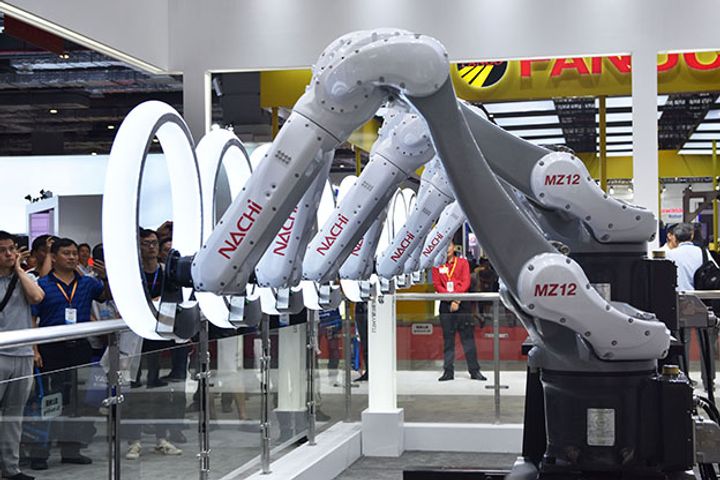 China's Robotics Firms Are on the Hunt for Better Applications

(Yicai Global) Sept. 20 -- Robotics firms in China are looking to find the best applications possible for their smart technologies, Yicai Global found at the China International Industry Fair, which opened yesterday in Shanghai.

The manufacturers at the show were looking to build highly flexible, digitized smart manufacturing systems using automation in the high-end industrial value chain.

Robot maker ABB had a one-arm robot on display named YuMi, which China Senior Vice President Li Gang said was the firm's most dexterous robot to date. It can easily be integrated into current production lines to protect users, he added.

The CIIF Robotics Show has become one of the largest and most influential robotics exhibitions in Asia and the world, an official with the Shanghai Municipal Commission of Economy and Informatization told Yicai Global.

Seigo Nishikawa, general manager at Yaskawa Electric China, concurred. The city is a gathering place for global industrial robot makers, he said, adding that this is one of the four major varieties of bots.

Domestic and international robotics giants value the CIIF because of the huge Chinese market, added Ni Side, global president of robotics at ABB. Demand for robots in the country is expected to match the combined demand among the four nations trailing it this year or next, he said.

Shanghai is an important base for ABB's development in China and is home to most of its employees in the country. More than 95 percent of its robots sold in China are currently developed, made and sold there, added Chen Yueshan, head of the firm's robotics marketing department.

One of the most notable features of robots on display was how they are becoming much lighter and safer to use, so they can work alongside people to carry out intense manual labor tasks.

Smart robots are likely to complete replace human work in the future and unmanned factories will predominate, according to Du Yuhe, secretary-general at the Industry 4.0 Club. Industry 4.0 is seen as the fourth industrial revolution and is used to refer to modern day trends such as automation and the use of data in manufacturing.