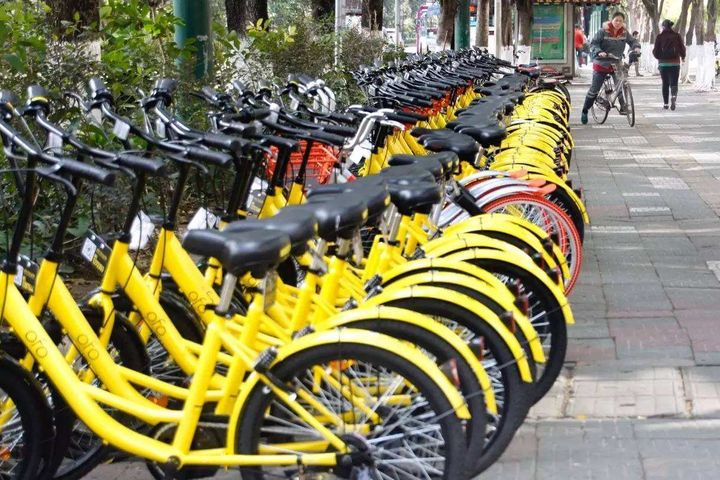 (Yicai Global) Dec. 5 -- Several Chinese bicycle-sharing service firms have collapsed in the last couple of months, but a company outside the 'top echelon' of the bike-sharing market announced another USD350 million financing deal yesterday.

In the past, the funding race between the two dominant players, Beijing Mobike Technology Co.'s Mobike brand and its main competitor Ofo owned by Beijing Bikelock Technology Co. and several other minor competitors focused on bicycle development and innovation.

However, with recent financing deals, the center of gravity has drifted toward the mobility market, or rather platforms that combine bicycle and motor vehicle services.

Hellobike announced yesterday that it had wrapped up a USD350 million D1 funding round led by Ant Financial Services Group, Shenzhen Capital Group, Fujitec and WM Motor. The company has recently merged with an affiliate of Changzhou Youon Public Bicycle System Co. After the deal, Ant Financial has become Hellobike's largest shareholder, per a statement issued by Youon.

Aside from shared bicycles, Hellobike currently operates some 60,000 motorized bikes in more than 10 cities, and car-sharing services are also in the works, Yicai Global has learned.

The move is widely seen as an attempt to break DiDi Chuxing's monopoly over the Chinese mobility market. "Indeed, it was not entirely intended to drive expansion … or achieve other objectives, but the mobility has so many different dimensions," Xia Yiping, Mobike's chief technology officer, told Yicai Global in a recent interview.

From Xiaoming Bike to Coolqi and Bluegogo, there is already a long list of bike-sharing startups that have withered on the vine, and the list still grows.

As the market cools off, Mobike and Ofo have established themselves as the only dominant players and grown into popular 'mass' service platforms. This explains why few investors are interested in any bike-sharing firms other than the two leaders. Even those who previously invested in other companies are waiting for white knights to appear.

Ant Financial is the only exception.

Yunxin Venture Capital, a subsidiary of Ant Financial, Lingji and several other investors in addition to the public company will inject CNY2.3 billion (USD345 million) into Youon Low Carbon, of which CNY1.99 billion and CNY20 million will be paid by Yunxin and Lingji respectively, per the statement.

After the capital injection, Yunxin will replace Youon as Hellobike's largest shareholder with a 32.0467 percent stake.

Youon Low Carbon registered operating income of CNY25.7169 million and a net loss of CNY13.3568 million during the first seven months of this year, its parent said.

Before the deal, Youon Low Carbon and Hellobike were considered the most competitive players in the bike-sharing industry after Mobike and Ofo, and their merger is a synthesis of Alibaba's financial backing and Hellobike's products and operating model.

Hellobike is but one of the several bike-sharing operators for whom Ant Financial provided funding, however.

Ofo received strategic investment from Ant Financial in late April, and the firms announced plans to institute in-depth cooperation in payment, credit and business globalization aimed at improving user experience for bike-sharing services, promoting ecofriendly travel and the low carbon lifestyle, and facilitating the creation of a cashless society, yet neither firm mentioned the deal's value or shareholding structure.

After becoming Hellobike's largest shareholder, Ant Financial will continue to introduce credit-based deposit waivers to more eligible shared-bike users, the firm noted, adding that it is bullish about the sharing economy and will support all partners in the field with an open mind.

Given the rising cost of generating online traffic, Ant Financial will benefit from the deals in terms of creating new traffic sources for its own products and further developing the Sesame Credit ecosystem, Zhao Xiaoma, managing director at CIC, said in an interview with Yicai Global.

But Mobike and Ofo still remain the most sought-after investment targets on the capital market.

They have not held talks about a merger on the company level, and both will likely announce the next round of financing soon, Yicai Global has learned from multiple sources.

SoftBank Group has almost finished a new funding series for Ofo, and the proceeds will mostly go to overseas market expansion and Internet of Things (IOT) initiatives, a well-informed source told our reporter.

Ofo announced its last (series-E) financing round on July 6, with over USD700 million raised. Alibaba, Hony Capital and CITIC Industry Fund led the deal, with DiDi Chuxing and DST acting as 'secondary' investors.

The Transition Toward the Mobility Market

DiDi Chuxing is acutely aware of its challenges, its chief executive Cheng Wei told a covey of reporters at the World Internet Congress earlier this year. "We had many close shaves, and we don't feel safe even today."

Cheng is a well-known expert at cross-industry investment, but he also sensed the threat posed by other bike-sharing platforms branching out into the mobility market.

Having invested in Ofo several times, DiDi Chuxing has successfully broken into both the ride-hailing and bike-sharing markets, especially after its formal business integration with Ofo in April. By contrast, the future looks rather less promising for Ofo's arch rival, Mobike. The firm announced a partnership with carpooling app Dida Pinche shortly after its tie-up with e-hailing firm Shouqi Limousine & Chauffeur.

DiDi Chuxing is also considering other businesses such as timeshare and electric car charging piles, Cheng said at the internet conference.

Mobike has also shown an interest in these new businesses, and has set up a dedicated mobility service department that "operates and obtains funding independently as a separate entity."

"If we look back at [the history] of Mobike, people may not know … for example, people in Shanghai make tens of millions of trips on the Metro and buses, [but] more trips on foot. We have now offered mobility solutions for trips ranging between one and five kilometers. What if a user needs to travel longer distances, say five to eight kilometers, eight to 15 kilometers or 15 to 25 kilometers? How should we meet this need? This is something that we're working on," chief technology officer, Xia Yiping, stated.

Some 35 to 40 percent commuters take Mobike shuttle buses or the Metro daily, Xia pointed out. In an ideal scenario, a user rides a Mobike to a subway station, gets on a train without having to stop to buy a ticket, and then finds another Mobike after getting off. This solution strives to meet users' needs in urban areas through service densification.

The biggest drawback of this approach is that when Mobike needs to optimize the relationship between its network with bus and Metro services, it lacks access to data on all the means of transport and products involved, which explains why it decided to open-source its own data.

As market regulation tightened, especially after the ban on adding new bikes, bike-sharing firms realized that they could not beat the competition by simply scaling up operations or rolling out more products, but instead had to strike a balance between the value of users and resources, extend the boundaries and industry chains of their bike-sharing businesses, branch out into other markets, and work out the most reliable and 'versatile' profit models.

As a player in the mobility market, WM Motor also feels the heat.

When asked if he felt the pressure from bike-sharing companies during the Yicai Annual Summit on Nov. 29, Shen Hui, WM Motor's founder, avoided a direct answer. Bike-sharing is a good thing, and it generates sources of traffic, he noted, sitting beside Mobike's Xia Yiping. Different people have different mobility needs, he added. Some people travel less than five kilometers, and some more than five kilometers, so different means of transport are needed to furnish these needs. "The demand for small cars is always there."

"I think the pressure is not from bike-sharing … it is our partner and brings us traffic. But rather, some automakers are interested in branching out [into the electric vehicle business]. Our differentiator is power of execution. They (carmakers) are giants, and we're a tiny ant," Shen explained.

WM Motor has invested in Hellobike in several financing rounds, including the USD350 million D1-round announced five days after the summit.

All these deals make that Shen Hui keenly aware of the importance of building a complete ecosystem on the mobility market.

"It is inevitable for the bike-sharing industry to evolve from 'two wheels' to 'four wheels'," U-bicycle founder Xu Yi told Yicai Global. "It makes sense for high frequency, low-cost and high-volume apps to penetrate more profitable businesses where the frequency of service is lower. They can use high frequency services to divert traffic to their own platforms, which enables them to provide more lucrative services," he observed.

Vertical integration is the future for bike-sharing businesses, Zhao Xiaoma believes. "The competitive landscape of the industry is far from settled. The main barriers are product development and operational capabilities. Companies with strong capital backing can increase service density over the short term, allowing them to put in more low-end products and low-efficiency service, which is an approach that can't be sustained," he reasoned.