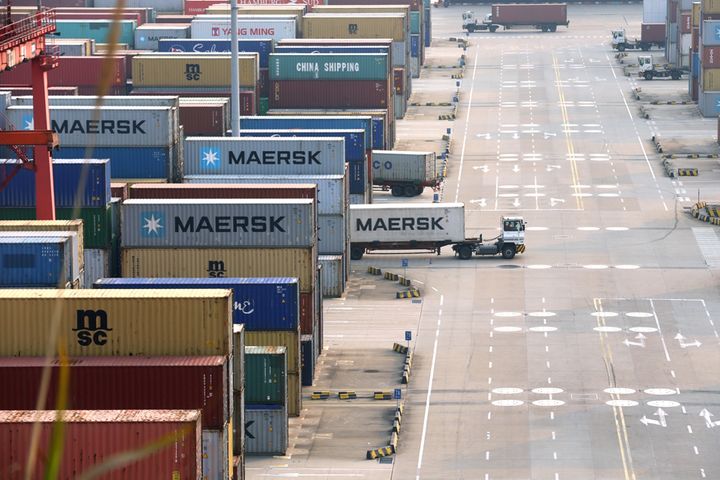 (Yicai Global) May 9 -- Boosted by a stable economy and gradually strengthening domestic demand, China's import growth rebounded last month, according to the latest trade data. Export growth slowed though there were positive indications.

Exports fell 2.7 percent in April compared with a 1.4 percent gain for the first quarter, the data showed. Imports rose by 4 percent, a significant rebound from the 4.8 percent drop logged for the first three months of the year.

China's domestic demand is expected to stabilize and recover, spurred by a number of favorable policies, including tax cuts and fee reductions, and we believe that the import growth is in the process of improving. Specifically, the stabilization of production has led to an increase in the volume of commodity imports, with imports of products such as crude oil, steel and copper growing faster. At the same time, prices of primary commodities, including iron ore, rose sharply, supporting import growth.

Driven by cuts in value-added tax and policies to stimulate auto sales, imports of vehicles and chassis have rebounded significantly.

It's worth noting that China's stimulus policy, which gives priority to cutting taxes and administrative fees and supporting private businesses, is different from previous measures that buoyed economic activity through investment. This time, the boost to the overseas economy is expected to be smaller and may come later, while China's economy was the first to show signs of stabilizing in the first quarter this year. Imports are likely to grow faster than exports in the short term, so the trade surplus may face further narrowing pressure.

Export growth last month continued to fall from the first quarter, mostly impacted by three factors -- a weaker global economy, a higher export base in April and the generally declining export growth of labor-intensive products such as clothes and toys, compared with the recovery of exports in Southeast Asian countries, including Vietnam. The third factor is likely to push some orders to Southeast Asian countries from China.

However, excessive pessimism about China's exports is unnecessary since some recent positive factors are noteworthy. First, China's exports to the Eurozone are still growing, and growth is the fastest among major export destinations. Second, China's exports to South Korea and Vietnam have recovered. Third, the purchasing manager indexes of three major economies -- the European Union, the US and Japan -- have probably bottomed out, suggesting a further sharp decline in global demand is less likely.

Still it will be difficult for China's export growth to rebound significantly due to various factors, including overall weak demand overseas and increasing uncertainty in the trade environment.

Zhong Zhengsheng is the president and chief economist of consultancy CEBM Group, a subsidiary of the Caixin Insight Group.