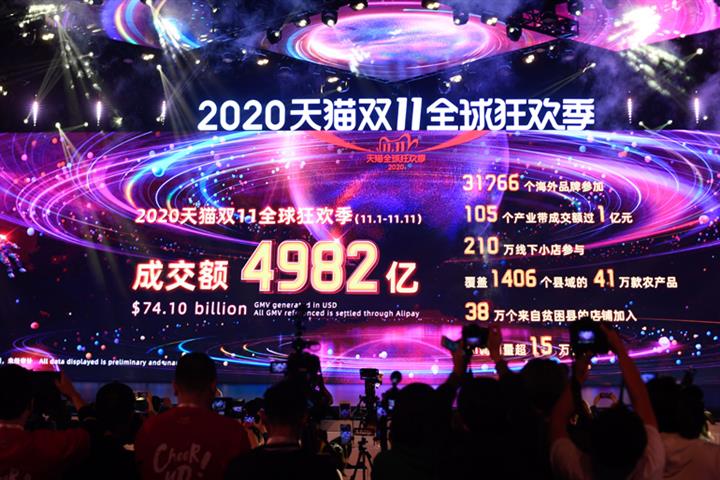 Alibaba, which inaugurated the first Double 11 in 2009, said sales through its business-to-consumer site Tmall hit CNY498.2 billion (USD75.1 billion) between Nov. 1 and yesterday, when the event ended, a 26 percent gain from a year earlier after the addition of three extra days this year was factored out. JD.Com’s turnover rose 33 percent to more than CNY271.5 billion.

The subsidies, vouchers and price-break coupons that vendors dangled during this year’s shopping extravaganza demanded reams of calculations and the merging of multiple orders, causing consternation among consumers. One buyer told Yicai Global that the lowest discount prices shown in many promotions were actually for purchases of three such items, not one, a bait and switch tactic likely to lure and sway consumers’ judgment in her view.

Other shoppers moaned that promotional prices were not as low as usual. The cut-rate price of a 27-inch computer display was higher than an August promotion, and some merchants are suspected of having jacked up prices just before Double 11.

Customers also carped that both vendors and Alibaba’s Taobao platform closed their refund channels yesterday, thus voiding some coupons. Taobao rejoined that it closed this portal after a steep spike in merchant orders.

The uproar has already drawn the attention of China’s watchdogs. Several agencies, among them the General Administration for Market Regulation, said late last month that they will come down hard on online price fixing and fraud and other infractions between October and December.

The e-commerce platforms of Alibaba, JD.Com and Suning.Com also chimed in then, pledging to step up monitoring of prices of Double-11 goods and take stern measures if violations turned up.