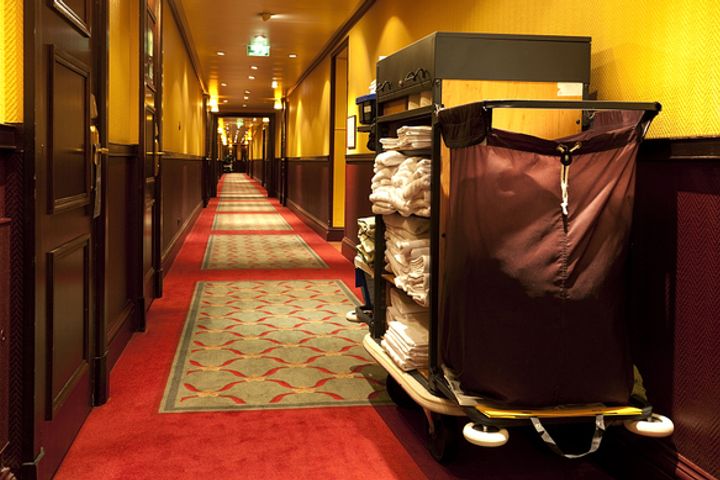 (Yicai Global) Nov. 15 -- Five-star hotels in China that charge as much as CNY5,000 (USD721) a night are coming under the spotlight for the shocking behaviour of their cleaners -- some of who wash guest drinking cups with dirty bath towels.

A compilation video titled Secret of the Cups is currently doing the rounds online, exposing the dirty cleaning secrets at 14 top-tier hotels, mostly based in Shanghai and Beijing. In one clip, a worker at the Shanghai Bulgari Hotel removes disposable cup lids from the trash can to re-use. At another hotel a cleaner uses the dregs from a shampoo bottle to wash glasses.

The Shanghai tourism administration has already seen the video and investigations are underway, state-backed news site The Paper reported.

"The reality is even worse than the videos," Hua Zong [online username], who originally uploaded the video on China's Twitter-esque Weibo, told The Paper. "These are the best hotels in the country, the most regulated -- imagine the situation at other hotels. Don't think this is just a crisis for the rich."

Hua filmed the cleaners by setting up hidden cameras in his room. Clips mostly focus on the bathroom sink, which staff use to clean hotel cups.

Hotels in the video include those from Peninsula, Conrad, Park Hyatt, and Aman Summer Palace in Beijing; Shangri-La Fuzhou; Sheraton Guiyang; Sheraton Nanchang; and Bulgari, Four Seasons, Mandarin Oriental, Puli, Ritz-Carlton, Le Royal Meridien and Waldorf Astoria venues in Shanghai. Room rates at the hotels are between CNY1,000 and CNY5,000 a night.

Hua chose the country's most expensive hotels in hopes of unleashing the most chaos on the hotel sector.

"If such a serious problem exists in these famous, expensive hotels -- what does that say about low-price, budget hotels?" he said.