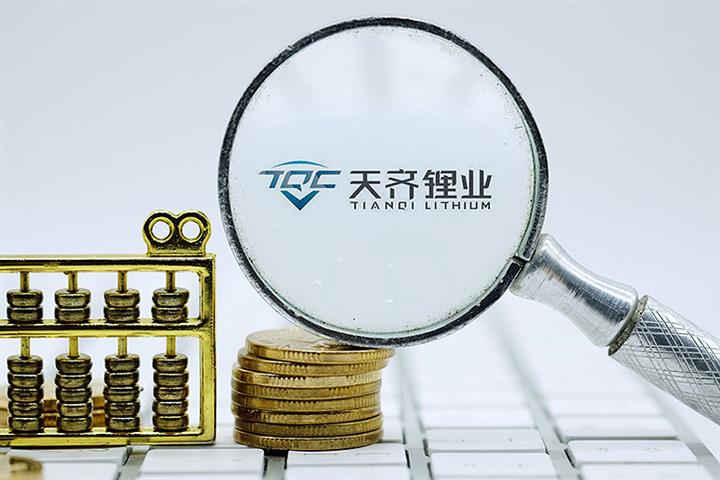 (Yicai Global) Nov. 16 -- Shares in Tianqi Lithium plummeted by 7.69 percent today on the news that China’s biggest lithium extractor, a material used to make electric car batteries, is in danger of defaulting on a USD1.9 billion debt due at the end of the month.

The USD1.9 billion loan, leveraged in 2018 to purchase equity in the world’s biggest lithium producer, Chile’s Sociedad Quimica y Minera, might not be repaid in time or in full, the Chengdu-based firm said on Nov. 13. There is a risk of default, it added.

The amount owed, which is equivalent to more than three times the firm’s assets, is part of a USD3.5 billion syndicated loan that Tianqi Lithium took out from China Citic Bank that year.

Tianqi Lithium will suspend interest payments on the loan for the rest of the year, it added. Unpaid interest so far comes to CNY471 million (USD71.6 million).

The firm is facing plunging earnings as lithium prices dive. Net profit plummeted nearly 10 times in the nine months ended Sept. 30 from the same period last year to a gaping loss of CNY1.08 billion (USD164 million), according to the company’s third quarter earnings report. Revenue was down 36 percent to CNY2.4 billion.

Tianqi Lithium also disclosed that should the company not be in a position to repay its mountain of debt, there was a danger of triggering three major risks. These are the risk of major litigation and arbitration, the risk of project construction or production under expectations and the risk of a too-high loan-to-value ratio of shares held by controlling shareholders.

Should any of these occur, Tianqi Lithium may request the repayment of pledged assets, it said.

Majority shareholder Tianqi Group has pledged 75.82 percent of its shares, around 24 percent of Tianqi Lithium’s total equity, worth CNY3.2 billion. The group has discreetly reduced its holdings in the firm by 4.3 percent in the last five months, cashing in CNY1.4 billion (USD212.5 million).