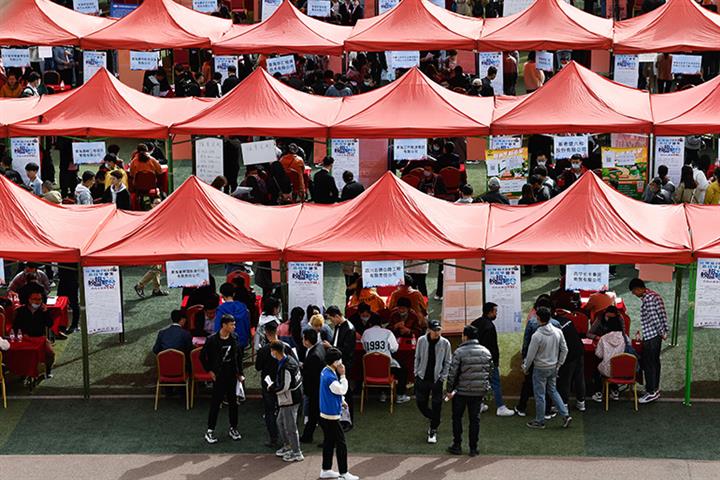 (Yicai Global) March 11 -- Chinese Premier Li Keqiang has promised more pro-employment policies this year as the country expects to have a record number of about 16 million urban job seekers.

China aims to create 11 million to 13 million urban jobs in 2022, Li said at a press conference in Beijing today following the close of the national legislature’s annual meeting.

The country will focus its fiscal and monetary policies on employment this year to build new work platforms for the new labor force, and provide new employees with training and other help, Li said.

China must solve its employment issues through market-oriented means, such as encouraging company startups, and has been promoting the development of new technologies and business types in recent years, he said.

According to the government’s work report issued by the State Council, China’s cabinet, it aims to create more than 11 million new jobs in urban areas and keep the surveyed urban unemployment rate under 5.5 percent. Both figures are the same as last year’s target.

Some 12.7 million new jobs were created in 2021, and the surveyed urban jobless rate was 5.1 percent on average, both better than expected, per government data.

China has more than 200 million workers in the gig economy, and this type of work will exist for a long time, Li said. Regarding the labor rights and social security issues of gig workers, he said that the government must gradually improve policies to stimulate market vitality and social creativity while solving their employment issues.

It will be a hard task to stabilize employment, Zhang Yinghua, a researcher at the Chinese Academy of Social Sciences, told Yicai Global. China should continue to cut taxes and fees, and make it easier for firms to hire staff and make them more willing to do so, she said.

In addition, unemployment insurance funds can be used to train more technical talent to meet the demands of industrial upgrading and lower structural joblessness, Zhang added.