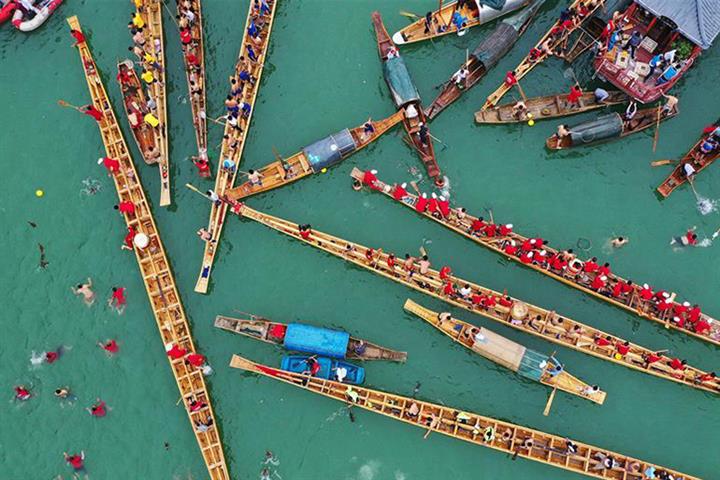 (Yicai Global) June 9 -- China can expect domestic tourist numbers to hit 100 million during the upcoming Dragon Boat Festival holiday, as the number of travelers returns to the level seen in the same period of 2019, according to figures from tourism platforms.

Travel demand during the festival, a three-day holiday that will start on June 12, is mainly for short- and medium-distance trips, according to Ctrip data.

China has controlled the coronavirus well overall, though there have been sporadic outbreaks in some areas, said Fang Zeqian, an industry analyst at Ctrip Research Institute. China’s tourism market will continue to improve during the upcoming holiday as people are still passionate about travel, he added.

Local activities are expected to make up the bulk of leisure pursuits over the holiday, with theme parks, ecological tours, and zoos set to be popular tourist attractions. IN some cities, traditional folk activities associated with the Dragon Boat Festival have become an important element in attracting visitors.

The average price of a domestic air ticket for the period has fallen by about 30 percent from the May Day holiday, according to TravelGo. The main cities, including Beijing, Shanghai, Chengdu, Chongqing, Hangzhou, and Kunming, are the most popular destinations.

Women accounted for 57 percent of booked travel packages, Ctrip data showed. In terms of age, the post-90s generation plans to travel the most during the holiday, making up 39 percent, followed by the post-80s generation at 30 percent.

The number of tourists born after 2000 increased 9.6 times compared with that of 2020, ranking third with a 16 percent share, surpassing those born in the 1970s.