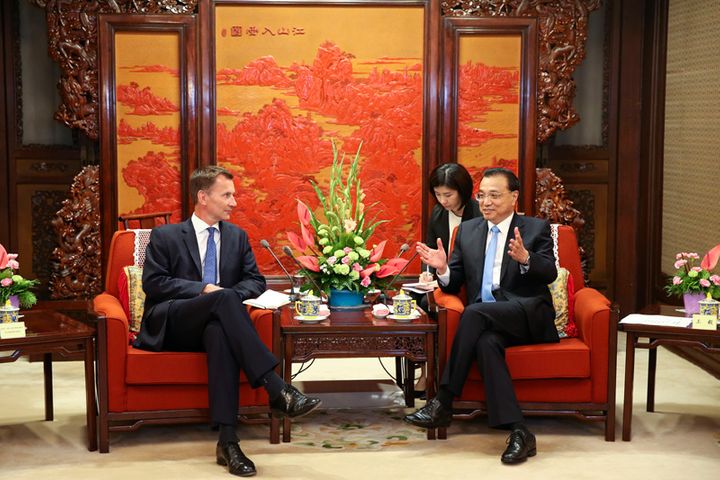 China and the UK, as permanent members of the United Nations Security Council and world major economies, should safeguard the international order with the principles of the UN Charter as the core, as well as multilateral trading system centered on the World Trade Organization, said the premier.

"We should work together to uphold multilateralism, maintain an open world economy, and inject a stable and constructive force into the world," Li stressed.

Li noted that China is willing to uphold the principle of mutual respect and equal treatment to promote all-round development of China-UK ties and cooperation.

He said two sides should give full play to own complementary advantages and expand cooperation in various fields.

With the launch of the Shanghai-London stock connect program this year, China and the UK should actively cultivate new cooperative growth points so as to achieve mutual benefit and win-win results, Li added.

The Chinese premier said China will create a better business environment for foreign enterprises in China, including the UK, and hoped that the UK side will also provide a good institutional guarantee for Chinese enterprises to invest in the UK.

Hunt said he was looking forward to next year's new round bilateral annual prime ministerial meeting and is willing to deepen political mutual trust and strengthen strategic docking with China.

As the current international situation is at a key point, China and the UK should strengthen communication and coordination, adhere to multilateralism and free trade, and maintain international order based on rules, he added.

Yang Jiechi, a member of the Political Bureau of the Communist Party of China (CPC) Central Committee, also met with Hunt in Beijing on Monday.

Yang, also director of the Office of the Foreign Affairs Commission of the CPC Central Committee, called on the two sides to implement the consensus reached by their leaders, strengthen strategic communication, enhance political trust, and expand cooperation.

Hunt said the UK was willing to work with China to boost the development of the "Golden Era" of bilateral relations and safeguard multilateralism and international order.