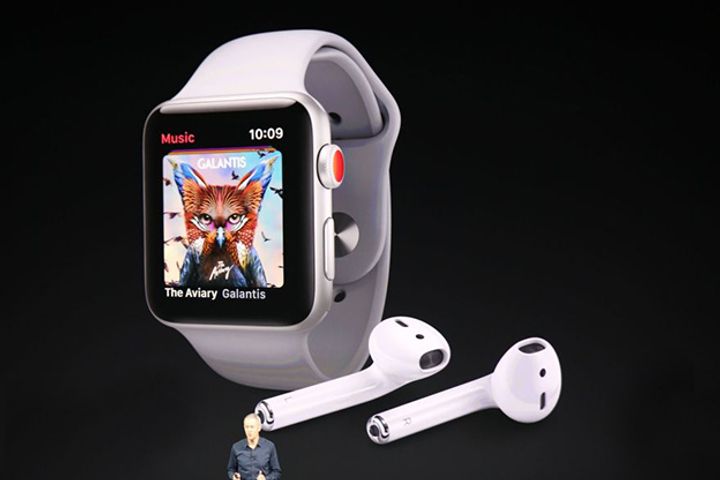 The cards will allow two devices to share the same phone number, meaning Apple Watch 3 users can make and receive phone calls and stream music without their iPhone nearby. China Unicom stores in Shanghai, Tianjin, Guangzhou, Shenzhen, Zhengzhou and Changsha are accepting applications for the new cards.

The Chinese firm began studying eSIM wearables with Apple Inc. in 2015. It offered LTE services immediately after the release of the Apple Watch 3 in September, but withdrew new registrations a week later. Apple wound up offering a refund to China users who bought the product in hope of using it without needing to be constantly connected to their smartphone.

China likes to keep a close eye on users of its mobile networks and requires real name registration with providers, but the eSIMs (e for embedded, not electronic) are planted in the watch by Apple. They allow owners to choose their telecoms operator and a data plan but also make it tougher for regulators to monitor activity.

Apple isn't having much luck in China as of late. As domestic smartphone makers rise to popularity, the once-adored brand is struggling to maintain its status and finds itself having to adapt to stay competitive in the world's largest smartphone market.

The money-hungry firm sparked outrage in May by trying to siphon a 30-percent share of cash tips given to content creators by viewers on WeChat, a social media and lifestyle app run by China's largest tech firm Tencent Holdings Ltd.  Apple altered its terms to remedy the issue in September and officially patched things up with Tencent last month, allowing it to bring the 'tip' button back to WeChat.

Apple also conceded to Chinese regulators in July by agreeing to set up its first data center on the mainland. It also banned hundreds of virtual private network apps from its App Store at the will of local authorities. VPNs allow netizens to bypass China's Great Firewall, which prevents access to popular websites and messaging apps, such as Google, Facebook and WhatsApp.