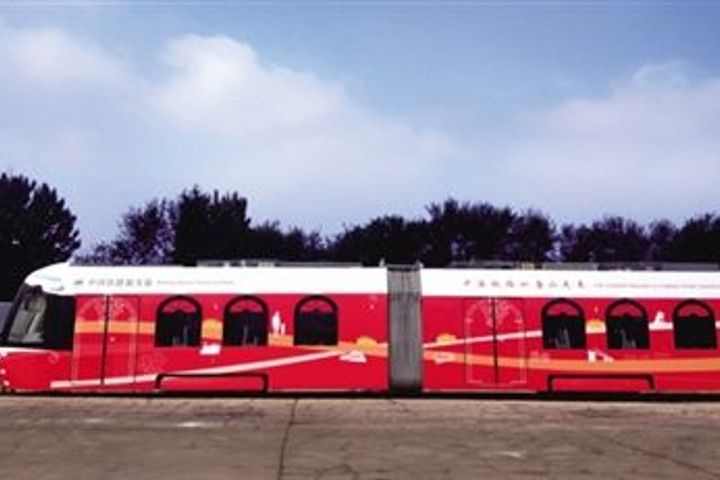 It is also the first commercial application of a hydrogen-powered trolley in the world, blazing a new trail in China's new-energy rail transportation industry.

Hydrogen fuel cells are the main direction of clean energy development worldwide. They generate electricity through direct hydrogen-oxygen electrochemical reaction, the inverse of water electrolysis. Unique features of hydrogen fuel cells include high energy density, low noise and zero pollution. They produce no nitrogen oxide as the temperature of the electrochemical reaction inside the cells is controlled at under 100 degrees Celsius, with water being the only 'emission.'

After four years of dedicated efforts, CRRC Tangshan became the first company in the world to successfully develop fuel cell/supercapacitor hybrid traction and control and several other key technologies. The light rail does not require any overhead wire systems and produces no pollutants, making it one-of-a-kind innovation.

The Tangshan-Xugezhuang railway is 136 years old. Tangshan is one of China's earliest industrial cities and is home to many industrial heritage sites.

The hydrogen trolleys will roll out on all industry-heritage tour routes. Original features of the century-old railway will be completely preserved as the vehicles need no catenary facilities, new tracks or charging piles. With the latest 100-percent low-floor technology, the distance between tram carriage floors and the tracks is only 35 centimeters, meaning that no platforms need be built. The minimum turning radius is 19 meters, so the trams can run on tracks in urban roads without rebuilding them and passengers can easily board. The tram route is 13.84 kilometers. The streetcar can be refilled with hydrogen in 15 minutes and can run for 40 kilometers at a maximum speed of 70 kilometers per hour.