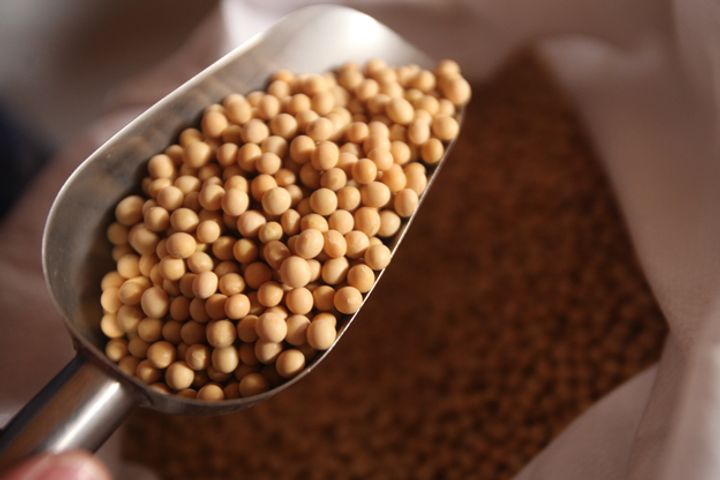 (Yicai Global) Oct. 24 -- The ongoing China-US trade dispute has the potential to transform the world soybean market as China seeks alternative suppliers and switches to other animal feedstuffs.

US soybean prices will climb to CNY600 (US85.70) or more a ton because of new import levies, surpassing prices for Brazilian beans and those grown in northeast China, Wang Wenjie, head of Tianjin Institute of Animal Husbandry and Veterinary Science, told Yicai Global in an interview. The US's competitive advantage will evaporate, he added.

Since the trade conflict got underway, soybeans have become one of the farm products most affected. China was previously the biggest market for US soybeans, taking more than 60 percent of its crop. After Beijing imposed an extra 25 percent duty on certain US imports on July 6 in response to moves by the Trump administration, buyers may be encouraged to turn elsewhere.

The trade friction is not necessarily a bad thing, as it will force a shift in China's farming practices, industry insiders said. The country will find new trading partners, develop new sources of protein-rich feed, increase the domestic acreage given over to soybean production or use less, Wang added.

Brazilian soybean imports are expected to hit an annual 80 million tons over the next few years, surpassing last year's 51 million, according to Lin Guofa, research director at Bric Global Agricultural Consultants. Argentina and Uruguay are also expected to increase their exports of the legume.

Russia, Ukraine and African countries are likely to become new sources. Chinese businesses that lease agricultural land in Russia sent a first shipment of thousands of tons, which reached the port of Fushun in northeastern Heilongjiang province on Oct. 18. An agreement was also reached last month for Ethiopian soybeans to be sold in China.

The cabinet-approved China Feed Industry Association has drafted new standards for pig and chicken feed to lower the need for protein. Chinese hogs are fed up to 20 percent of protein in their meals while the international average is 12 percent. If farmers adopt the international standard, the country's soybean demand would drop 27 million tons, or the equivalent of 82 percent of the amount bought from the US last year.

A high percentage of protein in livestock feed can promote weight gain, but it can also lead to a high concentration of ammonia gas at farms, as well as high levels of nitrogen in animal feces, Bric Global's Lin said. That harms pigs and chickens, as well as the environment, he added.