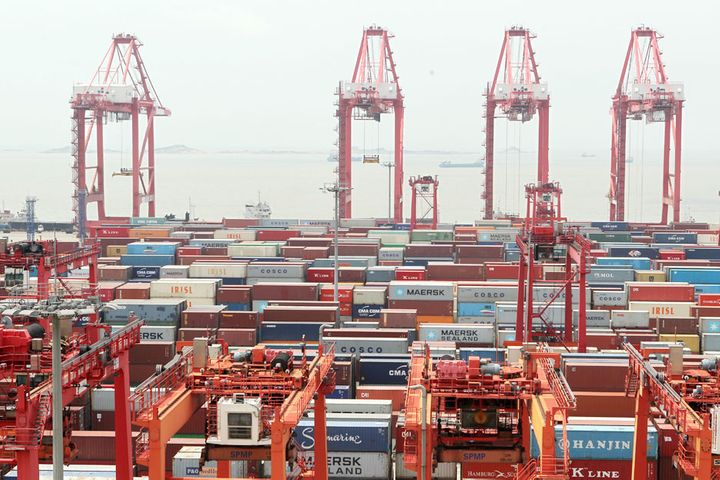 (Yicai Global) Sept. 9 -- China's positive trade balance with the US grew 7.7 percent to CNY1.33 trillion (USD187 billion) on the year in the first eight months, though the total trade value between the pair declined in the period from the influence of China-US trade frictions, the latest statistics China's General Administration of Customs released yesterday show.

America was China's third-largest mercantile partner in the period, and their bilateral trade hit CNY2.42 trillion in an annual 9 percent drop to make up 12 percent of China's total. Chinese exports to the US were CNY1.9 trillion, showing a 3.7 percent yearly decrease, while imports from the US slumped 23.5 percent on the year to CNY545 billion (USD76.5 billion).

China's overall trade volume with its largest trading partner the EU rose in the eight months to CNY3.15 trillion in 9.7 percent growth from a year before to comprise 15.6 percent of the total, while the country's corresponding figure for its second-largest trade partner the Association of Southeast Asian Nations was CNY2.74 trillion, soaring by nearly 12 percent annually and accounting for 13.6 percent of all foreign trade.

Current international economic and trade growth has slowed, but China's imports and exports have always shown strong resilience, said Li Kuiwen, director of the Statistical Analysis Department of the General Administration of Customs. Their total value in a single month has exceeded CNY2.5 trillion for five straight months, he added.

China's total volume of imports and exports of commodities reached CNY20 trillion in the first eight months, growing 3.6 percent from the same period last year. That of exported goods was almost CNY11 trillion, up 6.1 percent, and that for imported items tallied CNY9.218 trillion, climbing by 0.8 of a percent. The trade surplus was CNY1.77 trillion, expanding by 46 percent, the GAC data also show.

China's total value of exports and imports reached CNY2.72 trillion last month alone in an annual rise of 0.1 of a percentage point. That for exports was CNY1.48 trillion, climbing by 2.6 percent, while imports reached 1.24 trillion, down 2.6 percent. The positive trade balance in August was about CNY240 billion (USD33.5 billion), skyrocketing by about 42 percent.