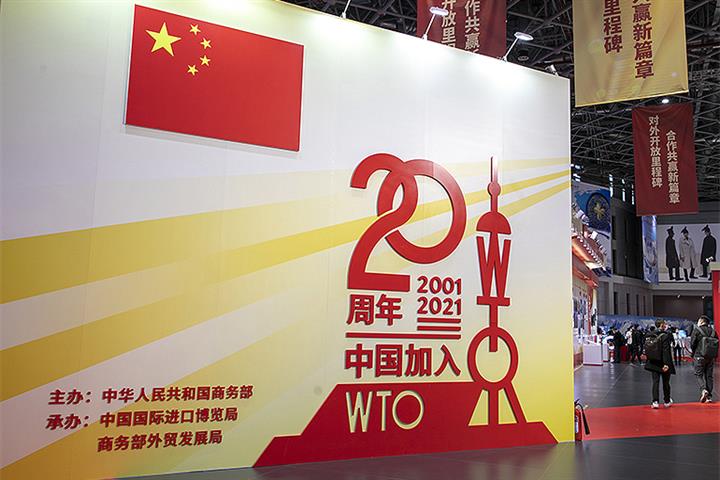 (Yicai Global) Dec. 10 -- China has fulfilled the promises it made when the country joined the World Trade Organization 20 years ago, steadily pursuing reforms and opening-up the financial sector.

China’s large state-owned commercial banks have successively completed joint-stock reforms and public share offerings, and restrictions on the shareholding ratio for foreign investment have been loosened. China’s market-oriented reforms regarding the exchange rate have also been accelerated and the internationalization of the yuan has made progress.

The state-owned banks have implemented many significant reforms including organizational improvement, disposal of non-performing assets and drawing overseas strategic investors in the two decades since the country joined the WTO, Zeng Gang, deputy director-general of the National Institution for Finance and Development, told Yicai Global. The banks have also quickly improved their profitability, risk resistance and asset quality, he added.

In terms of risk resistance capability, the provision coverage of China’s banking sector was 6.9 percent in 2002, but it was 196.99 percent at the end of September, far above the international average.

The opening up in China’s financial sector has further accelerated since 2018 and the number of foreign-funded banking and insurance institutions in the country has also increased. Overseas-backed banks had established a total of 115 branches and 139 representative offices by the first half of this year, with the number of operational institutions at 930, and the total assets of foreign-funded banks reaching CNY3.73 trillion (USD586.05 billion).

The mature business practices and prominent risk-control capabilities of foreign-funded institutions have also played a positive role in boosting the growth of the Chinese banking sector. But the proportion of such organizations is small, so there has not been huge competition pressure in China’s banking industry, Zeng noted.

The People’s Bank of China, the central bank, initiated exchange rate reforms in July 2005, and began to implement a manageable and fluctuating exchange-rate system based on market supply and demand, with reference to a basket of currencies for guide adjustments.

From 2009 to 2015, the yuan’s internationalization has been hugely speeded up. The redback was successfully included in the basket of currencies for the International Monetary Fund’s Special Drawing Rights. Since the global financial crisis, China has gradually loosened the limitations on using the yuan in cross-border scenarios, penned bilateral local currency swap agreements with 33 central banks and monetary authorities and set up yuan clearing arrangements in 20 nations and regions.

The focus of the yuan’s internationalization has shifted to the interconnection of the capital markets in recent years, and the infrastructure for cross-border payments has been constantly improved. China opened the Shenzhen-Hong Kong Stock Connect and Bond Connect between the Chinese mainland and Hong Kong in 2016 and 2017 respectively, having opened the Shanghai-Hong Kong Stock Connect in 2014.

The internationalization of the yuan should continue to exploit the role of the offshore market and there should be further opening up of capital-related projects, Zhu Jun, head of the PBOC’s International Department, noted yesterday, adding that further improvement of the business environment will be required to achieve that.