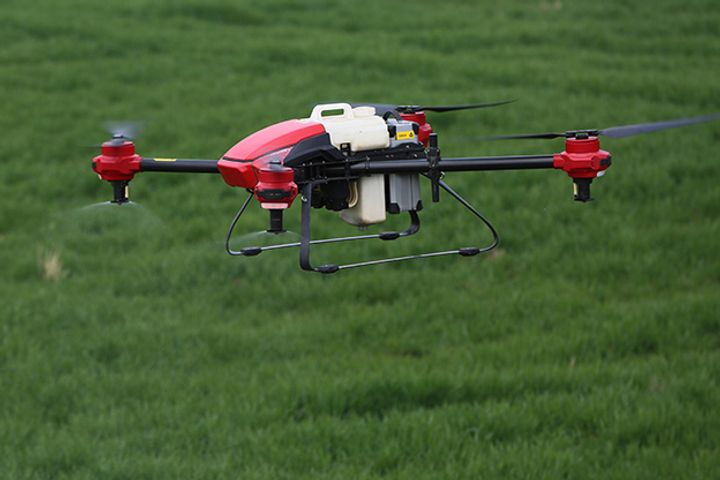 (Yicai Global) March 21 --  Chinese agricultural producers are increasingly using high-tech,  including facial recognition and drones, to cope with the decreasing  number of dedicated workforce as well as to become more effective.

Technologies like big  data, sensors and drones, are entering farms to bring about the next  green revolution, Zhu Qinghua, a director at seed and chemical  supplier Syngenta China, told Yicai Global.

Farmers need to make 40 to  50 decisions annually to secure their harvests, including the selection  of seeds as well as preventing diseases and pests, Huang Weidong, the  China head at agricultural input firm Bayer Crop Science, told Yicai  Global. This is why the industry is gradually moving closer to precision  agriculture, trying to predict environmental conditions, Huang added.

Alibaba and JD.Com on Facial Recognition

China's big tech giants of  Alibaba Group Holding and JD.Com have lined up to have their piece of  the smartening agricultural technology pie.

Hangzhou-based Alibaba's  cloud computing unit has introduced ET Agricultural Brain, which uses  facial, temperature and voice recognition to assess each pigs' health.  The technology can tell whether a sow is pregnant by following its  sleeping and standing positions as well as eating habits.

JD.Com's system will  reduce pig farmers' labor costs in the range of 30 percent to 50  percent, and lower the need for feed, as well as shorten hogs' lifespan  by five to eight days by optimizing animals' growth conditions, based on  the firm's estimate. China could save CNY50 billion (USD7.5 billion) if  it applied the system to all pig farms nationwide.

Unmanned aerial vehicles  are faster than humans as they can apply pesticides up to about 132  acres of farmland each day in northern China, whereas one person is  usually able to cover a maximum of 5 acres per day. So far drones have  sprayed pesticides to 44 acres of soil in China.

UAVs also have new skills.  They can map the area by using satellite imaging which involves  artificial intelligence to extract data, Big Data to assess problems and  cloud computing to make it easier for farmers to use the data tools,  Zhang from Gago added.

Over 1.2 million farmers  have penned deals with agricultural drone maker XAG and the  Guangzhou-based firm aims to increase the number to 3 million this year  by partnering with traditional machinery stores.