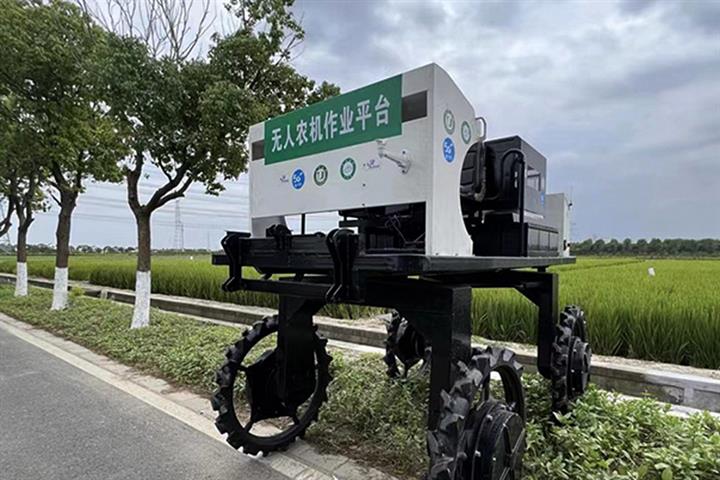 (Yicai Global) Sept. 27 -- Intelligent agriculture, which uses the latest tech advances, is coming to Shanghai, as the population ages and as large numbers of rural workers migrate to urban areas.

A number of driverless machines that have replaced laborers were ‘working’ in the fields of the Tushibao agricultural cooperative in Shanghai’s western Songjiang district, when Yicai Global recently visited.

The machines use fifth-generation mobile networks and China’s Beidou satellite positioning system to do basic farm work such as plowing, planting, and harvesting, said He Yangyang, the farm’s youthful leader.

With 5G and robotic technologies in use, the efficiency of farm machinery has increased greatly, he said. For example, drones can spray pesticides over an area of 30 hectares within a day, whereas it would take 20 people to do the same work in the same time.

Jiyi Robotics has been helping farmers with its smart agricultural management systems and unmanned aerial vehicles, easing the physical hardship involved with farming and helping them boost their earnings, said Chen Zhuangjian, founder of the Shanghai-based drone maker. That can help turn farming back into an attractive profession for younger people, he added.

China Mobile's 5G network and the Beidou navigation system have provided many local farming projects with services such as analysis of the state of crops, land irrigation schemes as well as output projection analysis, according to Zhu Chunhui, deputy general manager of a branch of the mobile carrier in Songjiang.

China Mobile is building a digital management platform that integrates the real-time data on farm land, machinery and other areas, Zhu noted, to gradually form a strong and capable management system for farmers.

In addition to agricultural production, Shanghai-based farm produce processors and retailers are also taking onboard the new technology. Bright Agricultural Development Group, the largest farm produce supplier in the city, launched its Hufeng Youliang app on Sept. 23. And it has integrated consumers’ order with the firm’s purchasing plans and farm machinery service schedule, so as to enhance the industry chain’s efficiency.

The digital transformation of farms is not just going on in Shanghai. By 2050, the agriculture-related digital economy across China may be worth as much as CNY24 trillion (USD3.35 trillion) , according to Zhao Chunjiang, director of the National Engineering Research Center for Information Technology in Agriculture.

Production will become greener and more efficient, and operations will be run mostly by machines, and decisions will be made based on Big Data, he added.