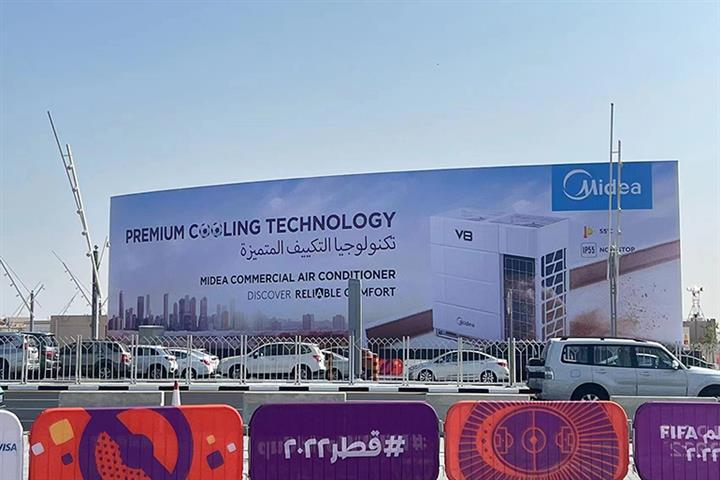 (Yicai Global) Nov. 24 -- As the spotlight falls on the World Cup in Qatar, the importance of the region's markets to Chinese firms is clear to see as many are as sponsors and suppliers to the event. Chinese white goods manufacturers in particular are stepping up investment in countries such as Egypt and Turkey to expand their presence in the Middle Eastern and African markets.

Haier Smart Home, which runs two industrial parks, three plants and three marketing centers in African countries including Egypt and Nigeria, plans to invest USD130 million to build a 200,000 square meter complex in Cairo that should be finished in early 2024, Yicai Global has learned.

Egypt is of particular interest to Chinese white goods firms as, despite high import tariffs, it has bilateral trade agreements with many countries in northern and eastern Africa, so products made in Egypt can be shipped into these countries quickly, said Fang Xuejing, an analyst with ChinaIOL.

There is huge demand for air conditioners in the region due to the high temperatures, so there are plenty of opportunities for Midea Group despite some unstable geopolitical factors, Dennis Lee, the Middle East and Africa general manager of Midea Building Technologies Overseas Marketing, told Yicai Global yesterday.

Midea now has an office in Dubai as well as an air conditioner production base and a refrigerator, laundry machine and water heater factory in Egypt that will supply the Middle Eastern and African markets, according to the Foshan, southern Guangdong province-based group’s 2021 annual report.

Its own brands, such as Midea and Clivet, make up over 80 percent of its central air conditioning sales in the Middle East. The companies is considering spending more on local production to speed up deliveries, Lee said.

Turkey is also a hot entry point for Chinese firms to enter the Middle Eastern market. Haier invested over EUR85 million (USD88.7 million) to build a tumble dryer factory and a dishwasher plant in the country. Both are now in production with an annual output of 1.5 million tumbledryers and one million dishwashers respectively.

Hisense Home Appliances Group, which is one of the official sponsors of the World Cup, has a Middle Eastern division based in Dubai and an African division based in South Africa. Their sales network covers 1.4 billion people in 70 countries. The Qingdao, eastern Shandong province-based firm plans to build its own after-sales centers and call centers in major cities in the region this year.

Certainly the demand is there. China’s exports of color TVs to Qatar surged 36.2 percent in the first 10 months from the same period last year, while the export value of white goods jumped 14.9 percent, according to data from the China Chamber of Commerce for Import and Export of Machinery and Electronic Products.

The value of China’s exports of color TVs to the 22 countries in the League of Arab States, including Qatar, soared 29 percent from January to October from a year earlier, while that of white goods jumped 11.2 percent.