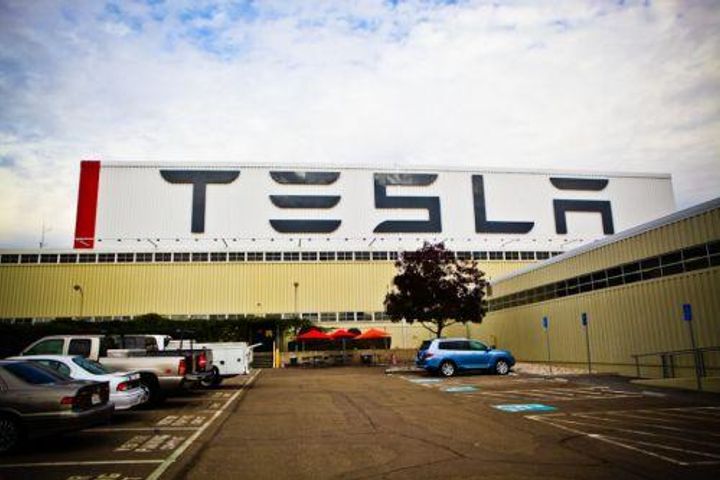 (Yicai Global) June 6 -- Stocks in leading suppliers to China's lithium battery industry have surged today in response to Tesla's reveal that the company is in talks with Shanghai authorities about building a factory in the eastern Chinese city.

"We are incredibly excited to build the first Gigafactory outside the US in China, specifically it is going to be in Shanghai," Tesla Head of Worldwide Sales Robin Ren said at an annual shareholders meeting.

Tesla has had an eye on setting up a factory in Shanghai for a while as part of efforts to bypass import tariffs in China. The government's decision last month to relax foreign investment rules in the country's automotive sector and raise joint venture shareholder ration limits could have led the California-based firm to accelerate plans.

Weekly production at Tesla is "extremely likely" to hit 5,000 Model 3 cars by the end of this month, Chief Executive Elon Musk told investors. The firm will soon produce more batteries at its Nevada Gigafactory than all other electric vehicle companies worldwide combined, he added.

Market players have been looking closely at Tesla and Panasonic's possible establishment of a new plant in China for the production of electric vehicles and lithium ion batteries in recent times. Tesla and Panasonic conducted similar cooperation at the firm's Nevada facility. Panasonic CEO Kazuhiro Tsug said Tesla would localize production in China at an earnings call last month.

"Due to a reduction in tariffs, prices of imported cars are falling and their price gaps with Chinese cars are shrinking, so Tesla has to build a plant and start production quickly in Shanghai," Zhang Xiang, an independent automobile analyst told Yicai Global.

He added that if Tesla slows down its production in China, its price advantage will become smaller as the Chinese government may further cut tariffs. Zhang said that the tariff cut played a role in Tesla's quick announcement of plans to establish the plant.

When it comes to new energy vehicle's battery, Zhang said that solely-invested battery plants cannot receive preferential measures, but rumors in the industry said that the soon-to-be-released list of battery suppliers will include international companies such as Samsung.