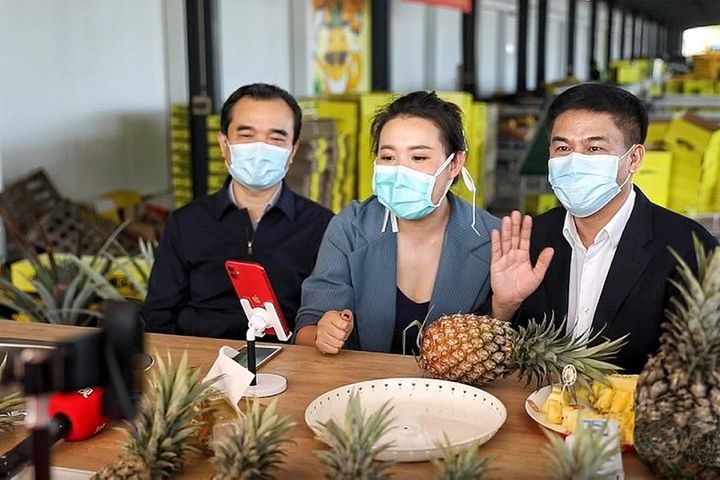 (Yicai Global) Feb. 27 -- Government and party officials in China's southernmost province of Hainan have taken to livestreaming to shift large stocks of vegetables and fruits that cannot be sold through conventional sales channels due to the novel coronavirus epidemic in the country.

Hainan, which lies south of the Tropic of Cancer, is an important supplier of winter fruits and vegetables to the rest of the country. February and March are peak season and around 50,000 tons of agricultural produce is expected to reach the market each day over this period, according to government data.

However, since the epidemic broke out, travel bans and other measures to stop the spread of the disease have been imposed, hampering logistics and encouraging people to hunker down at home. As a result, sales have plummeted. Just 39,900 tons of farm produce was sold to areas outside Hainan in the week ended Feb. 1, a 36 percent drop from the previous week.

"I give Sanya mangos the thumbs up!" exclaimed the mayor of the province's capital Sanya as he picked a big fruit from a tree. "As you can see, their skins are thin and their flesh is thick and juicy. The fruit is rich in vitamins A and C."

Mayor A Dong was the first local official to start livestreaming on Alibaba Group Holding's e-commerce marketplace Taobao on Feb. 13.

A few days later, Wanning Party Secretary He Jingping appeared online promoting that city's pineapples. Some 300,000 viewers tuned in and he sold more than 10,000 pineapples in 20 minutes, according to data from Taobao Live, the e-commerce site's dedicated livestreaming channel.

Before long, Party Secretary Zhong Mingming and Mayor Wang Xiaoqiao of Wenchang city were also promoting pineapples on Taobao Live. They sold around CNY1 million (USD142,600) worth, or 40,000 kilograms, of the fruit, livestreaming to 750,000 people. More orders came in after the broadcast, according to Taobao.

"It's the first time for us to see so many government officials and Party members promoting local agricultural products on e-commerce platforms," Lin Haiyun, director of the online sales division of the province's Department of Commerce, told Yicai Global. It is also rare nationwide, he added.

Alibaba's e-marketplaces have sold nearly 6,200 tons of agricultural products from Hainan. Most of the orders were delivered within 72 hours to Beijing, Shanghai, Guangzhou and other cities using the Hangzhou-based firm's digital supply chain, it said.