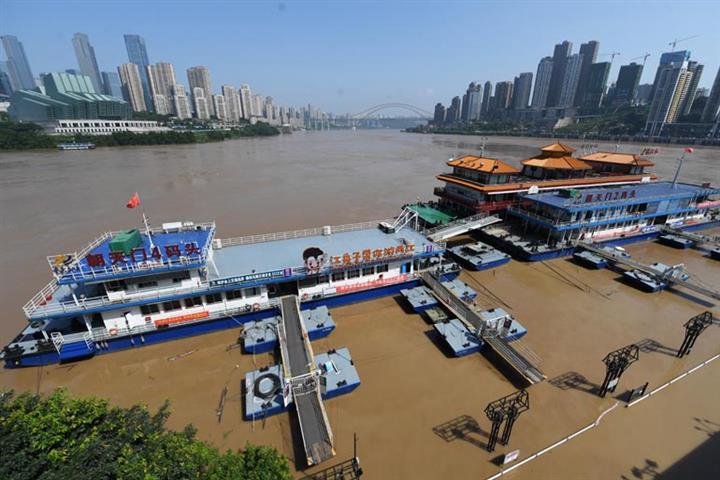 The flood peak will pass through Chongqing today, the People’s Daily reported yesterday, citing the city’s Office of Flood Control and Drought Relief Headquarters. Water levels are expected to rise one to two meters above the safety level to between 182 meters and 183 meters, it added.

China is experiencing its worst floods in decades as extreme rainfall batters much of the country. The massive Three Gorges Dam, that spans the Yangtze River, is coming under strain as it plays a major role in intercepting the flood waters, and saving the lower regions from disaster.

As of 8 a.m. this morning, water was flowing into one of the world’s largest reservoirs at a rate of 57,000 cubic meters per second, according to real-time data on the Bureau of Hydrology’s Changjiang Water Resources Commission website. Outflow was at 37,200 cbm per second and the dam’s water level had reached 160.56 meters, far above its designed capacity of 145 meters.

The dam wall will continue to be tested to the maximum as water inflow is expected to climb to around 60,000 cubic meters per second tonight.

The last flood peak was on July 19. Water levels of downstream run-off areas including Shishou in Hubei province, Dongting Lake in Hunan province and Poyang Lake in Jiangxi province are still dangerously high.

There is little relief in sight as more heavy rain is forecast for the whole Yangtze River drainage basin as well as parts of Yunnan, Guizhou, Hunan, Hubei, Anhui, Jiangsu provinces and the Guangxi Zhuang Autonomous Region over the next few days. The country’s meteorological association has issued a blue alert, the fourth highest warning.