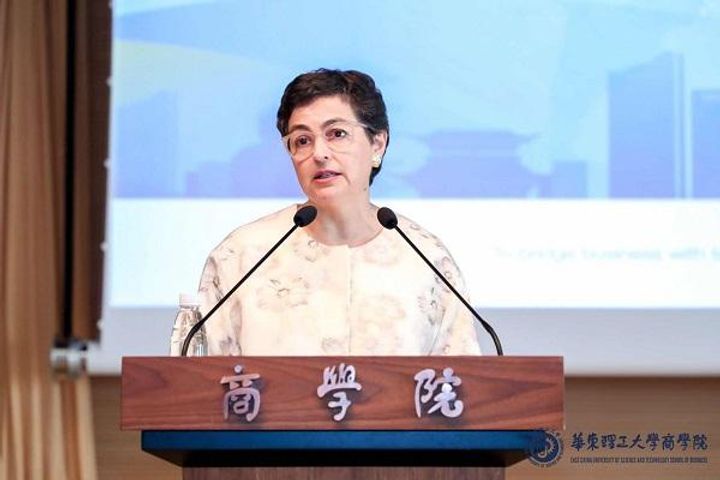 (Yicai Global) Nov. 6 -- Conventional trade fairs are about exports, whereas the China Import Expo is about imports, and this signals China's commitment to increasing imports and holding its door open. It also reflects China's understanding of the importance of imports, said Arancha Gonzalez, executive director of the Geneva-based International Trade Centre.

The center is a multilateral agency with a joint mandate with the World Trade Organization and the UN through the United Nations Conference on Trade and Development, per public information.

The traditional mercantilist view that exports are good, and imports are bad is outdated, she said, adding, "imported inputs are needed and in fact critical for export competitiveness."

Gonzalez made the above comments in her speech at the first International Forum on Chinese Imports held in Shanghai's East China University of Science and Technology on Nov. 4 on the eve of the first China International Import Expo set to run from Nov. 5 to 10 at Shanghai's National Convention & Exhibition Center.

China is now the world's second-largest economy, she noted, and the CIIE signals that China is shifting from the "world's factory" to the "world's market." "Through the Import Expo, I hope more companies from the developing countries can explore the Chinese market and do business with their Chinese counterparts."

We should make trade work for all, not just the 1 percent, she advised. Small and mid-sized firms should be involved in imports and exports too, because they are important channels of trade, she added.

The ITC has supported over 100 SMEs from developing countries in Asia, Africa, and Latin America in participating in the CIIE, Gonzalez said, and the ITC not only facilitated these companies' participation, but also prepared them to better understand the Chinese market and trade regulations, and helped them to connect to potential Chinese buyers.

"The Import Expo is also a space for dialogue to promote mutual understanding and cooperation -- both of which are urgently needed at this time," Gonzalez urged.