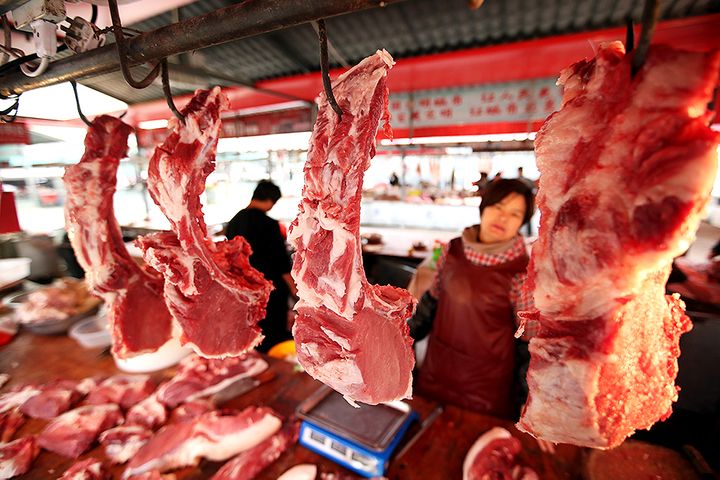 (Yicai Global) Nov. 14 -- Pork prices have gone through the roof in China in the second half as the African swine fever pandemic and the pork cycle have combined to drastically thin the nation's hog herds.

Overseas sellers sniffing business opportunities in the country that consumes half of the world's swine's flesh hope to seize this opportunity to enter the Chinese market.

China's Ministry of Commerce pledged to continue to encourage pork imports based on market principles at a press briefing in August.

"The offered price for imported pork climbed between 80 percent and 100 percent this year from last year," a frozen meat importer surnamed Wang told Yicai. He brought in 30 percent more meat this year than in the same period last year, he said.

China Customs' data confirms this claim. Nearly 162,000 tons of pork entered in September, up 71.6 percent on the year, and worth over CNY2.5 billion (USD356 million), or 2.5 times that in the same period last year, per the latest figures the country's General Administration of Customs released on Oct. 23. Incoming pork in the first three quarters stacked up to about 1.3 million tons, up 43.6 percent, and valued at more than CNY18.3 billion, also about a three-quarters annual rise.

European and South American countries are the ones mainly bringing home the bacon from China's ever-plumper imports, Wang said to Yicai Global. One Spanish processer with an export permit for the country is running full-bore and its capacity is nearing its limits, Wang has learned from his European suppliers.

Some 21 nations had secured these authorizations by late last year. Kazakhstan and Argentina also obtained theirs this year. Trade representatives from Norway, Russia, Poland and Colombia have also expressed their desire to supply their pig meat to China.

Brazil's pork exports reached a record high in July, and one third of these went to China, said Sergio Segovia, chairman of the Brazilian Trade and Investment Promotion Agency -- Apex-Brasil for short – who is very familiar with the huge pork supply gap in the country. "We are fully prepared and can export more pork to China," he told Yicai Global in an interview. "We have many pork processing plants waiting for inspection by China's quarantine authority to get a pork export permit for the country," he said. China will grant permits to 86 Brazilian pork processing plants by the end of this year, he predicted, adding "I expect this figure can go up to 200 late next year."

Norway has not exported pork to any other countries but produces more than its domestic needs, Olaug Vervik Bollestad, Norwegian minister of Agriculture and Food, told Yicai Global. The Nordic  nation will send its high-quality product to China once permitted, she said.

Norway seldom uses antibiotics or other agents to rear its hogs because food safety is its top priority, she stressed to Yicai Global.

Imported pork has price advantages when domestic costs are soaring, a customs inspection and quarantine staffer who requested anonymity told Yicai Global. But imports may lose their obvious price appeal when the Chinese supply returns to normal.

Foreign flesh is only a supplement to domestic pork, because Chinese people prefer the local stock in terms of taste and cooking habits, the staffer said. "Frozen meat is only a substitute for fresh meat, because frozen is inferior to fresh in both nutrition and taste," Wang said in agreement.

'Pork cycle' is an economics term that describes cyclical fluxes of supply and prices in livestock markets, when high prices induce farmers to raise more sows, leading to more hogs and thus lower prices, which then induce the converse effect. It was first observed in US pig markets in 1925.