Countries Must Learn From Each Other in Battle With Virus, Recession, Nobel Winner Says
Zhang Yushuo
DATE:  Mar 25 2020
/ SOURCE:  yicai 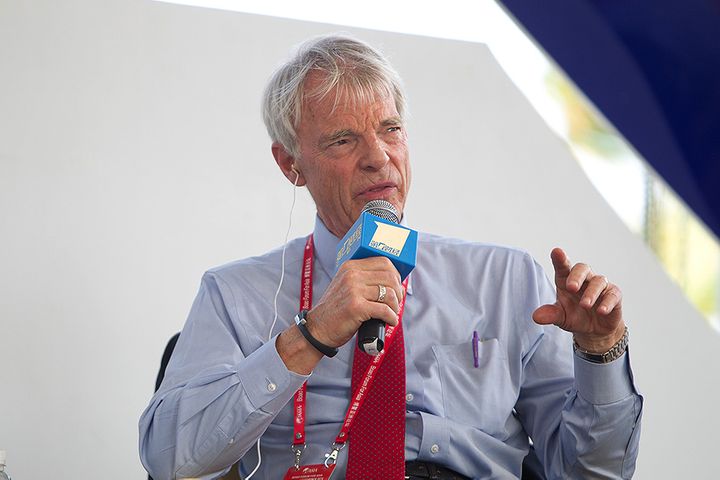 Countries Must Learn From Each Other in Battle With Virus, Recession, Nobel Winner Says

(Yicai Global) March 25 -- Covid-19 has quickly spiraled into a global economic recession. Good leadership, sharing information, increased coordination and digital technologies are all key to fighting the dual battle against the virus and the economic downturn, according to a conversation between a Canadian Nobel laureate and the director of Alibaba Group Holdings' Luohan Academy.

"As the former UK Prime Minister Winston Churchill once said, 'Never let a good crisis go to waste,' but China's experience was somehow wasted," said Chen Long, managing director of Alibaba's Hangzhou-based open research institute. Many East Asian countries including China have had a certain degree of success, but the lessons they offer have not been taken. As a result, this has become a pandemic.

Some Western governments were late to start and, despite having good medical facilities, now find themselves overwhelmed, said Michael Spence, Nobel prize winner in economics and a professor at New York University. He made his comments from Milan, one of Italy's hardest-hit regions.

The online discussion about the novel coronavirus, its economic fallout and our shared digital future was hosted by video conferencing service Zoom on March 22. Excerpts from the conversation are given below.

"We have learned that this virus knows no boundaries," Chen said. "So the only boundary, the only border that matters, is between the community and the virus." It is key to share information and knowledge, to prepare ahead and to coordinate medical resources.

As of March 21, Italy had over 50,000 confirmed cases of Covid-19 and over 4,000 deaths. For the past month, Italy has been imposing increasingly strict restrictions, but they started so late that the medical system has been overwhelmed, Spence said. Italy is now in a nationwide lockdown.

What European countries and the United States are going through now is what China has already experienced. Countries can learn from each other, including implementing measures like social distancing, isolation and tracking of confirmed cases, said Spence.

Unlike a financial crisis which will typically affect one or two sectors, such as a housing or high-tech bubble, this pandemic has brought a complete shutdown of the whole economy, said Chen. It has frozen the economy across four channels.

The first two channels are supply and demand, he said. People are reluctant to spend when their income drops. China's consumption in the first quarter has been hit badly. Worldwide consumption and investment have also disappeared. Every citizen has tried to escape.

The demand side also changes and there is very limited investment on the supply side. Companies completely shut down because they have no business, affecting every walk of life, he added.

The third channel is confidence, Chen said. Consumer and investor confidence have evaporated in the battle against the pandemic, affecting the financial markets. The long-term impact on the global economy depends on how soon the virus can be contained.

In order to control the virus, governments have to go into lockdown. The key is to find a balance to these battles, since the virus will rally if governments keep the economy running.

If people fail to contain the virus, we can expect the Covid-19 epidemic to continue to the end of the calendar year, Spence said.

It is very hard to nail down a precise time frame because the key is to find a balance between the pandemic and economic battles, Chen said.

Covid-19's impact on the global economy is determined by two factors, Chen said. One is how fast the virus spreads across the world. Second is, once it is under control, how to ensure that consumption returns to normal. It may take several quarters to recover. If we are lucky, the upswing will start by the end of this summer, he added.

Employment, the survival of businesses and liquidity are key for economic recovery, both researchers said. They are also optimistic about the future despite the current uncertainties.

Central banks in many countries have launched short-term policies to try to mitigate the long-term fall-out from Covid-19. The Federal Reserve of the United States has cut interest rates to zero for the first time.

While monetary policy is an important part of the response, it is not sufficient, said Spence. Monetary policy is not enough to bring the economy back to normal when people are staying home out of fear and panic.

After the Fed slashed interest rates to zero and promised to start buying long-term debt, both stocks and bonds went down. Normally when there's a flight to safety, the flight is to safer bonds. This time it was into cash, he added.

"Although the Dow Jones has already lost 30 percent and most markets have taken a pretty big hit, this is not going to produce a mammoth crash," Spence said.

It doesn't mean all is lost, he said. However difficult the transition period may be, we are going to recover. Those entities that are traded are going to get back on their feet, maybe with a little bit of help from governments in the cases of airlines and other large businesses.

Investors like Warren Buffet might be reluctant to dive into airlines depending on what the government does or into oil and gas which have idiosyncratic effects of their own, Spence added.

Monetary policy, such as reducing interest rates to nothing, should try to lower the cost borrowing if possible, since many individuals and micro enterprises need financial support, said Chen.

In a time of crisis, trust is vulnerable, said Spence. For example, the US wants to produce medical equipment domestically. For national security and business reasons, there is pressure to shorten the supply chain to have more things made at home.

However, the world is in an integrated economy. The Covid-19 virus can't be stopped at national borders, and no country can completely isolate itself from the virus. Therefore, good leadership and the ability to coordinate are key in this crisis.

Across the globe, people are short of medical equipment, such as ventilators and masks, which are needed in the fight against the virus. International cooperation is important.

Digital technologies are a game changer, said Chen. They force consumers to change their habits and to find new outlets. A lot of businesses are being forced overnight to go online, to combine offline and online.

"The digital infrastructure, mobile payment, fintech and all that have developed quicker in China than in other countries," said Chen. They have played an important role in containing the Covid-19 outbreak, such as by informing people about the spread of the contagion.

Artificial intelligence as well as Big Data help to diagnose, track and contact the infected and the potentially infected. Policymakers can also use this information to assess the impact of the coronavirus outbreak on their economy and society.