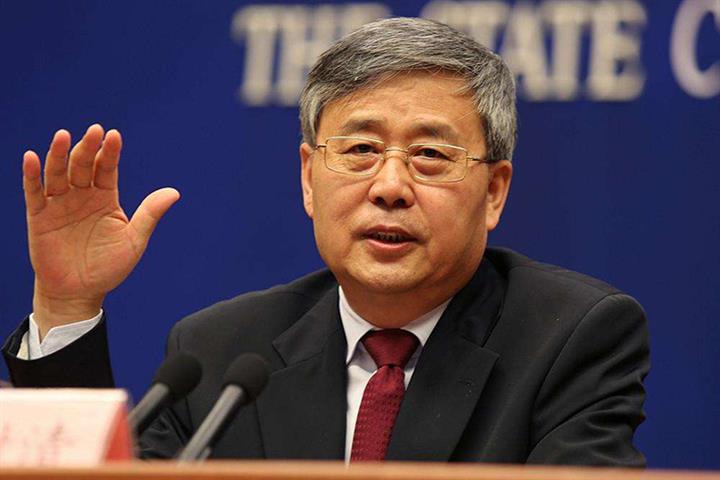 (Yicai Global) June 18 -- Many countries and regions plan new stimulus measures to support economic activity during the pandemic. They should leave some room for future policies, according to the head of China’s banking and insurance watchdog.

“China cherishes normal monetary and fiscal policies and we will not engage in a flood of strong stimulus measures, let alone deficit monetization and negative interest rates,” Guo Shuqing, chairman of the China Banking and Insurance Regulatory Commission, said in a speech delivered at the Lujiazui Forum in Shanghai today.

Guo said the world economy is highly integrated and large economies should consider the spillover effects of their own policies, strengthen communication and coordination with other nations when formulating and issuing policies, reduce risks and jointly safeguard the overall interests of the international community.

Flexibility in the financial system usually reflects the strength in the economy, Guo said. The financial market and real economy go in opposite directions, however, when the stock market rises continuously while the real economy is yet to reboot, he said. The distortion is more evident than ever on such occasions.

Though there are few signs of inflation at present, it is possible that inflation will return as it will take much time for global supply chains to recover, factory costs will rise further, and that the mechanism for currency derivatives will see changes, Guo said.

Banks and government are further encouraged to strengthen cooperation, he said. Lenders should introduce more unsecured, low-interest-rate credit products, while governments at all levels should share the costs and losses through fiscal discounts, financial guarantees and subsidies, Guo said.

Strengthen the role of policy-based finance in countercyclical regulation, Guo advised. The scale of credits arranged by the policy lender this year has already risen by nearly CNY1 trillion (USD141.3 billion) from last year, while the size of bond issuance will also increase, so the amount of available funds will surge significantly, he said.

Guo also urged the better exploitation of the special anti-risk capability of insurance by expanding the coverage of guarantees against risks, increasing the supply of operation-suspension and export & credit insurance products, and introducing more insurance varieties for weakened links such as the anti-epidemic fight and alleviation of disasters.

Efforts should be made to increase fund-raising support for companies in the global industry chain and help them expand their markets at home and overseas, Guo said. Stabilize export orders by offering fund-raising measures, including buyer’s credit, and use export and credit insurance to lower the risks and corresponding losses, he suggested.