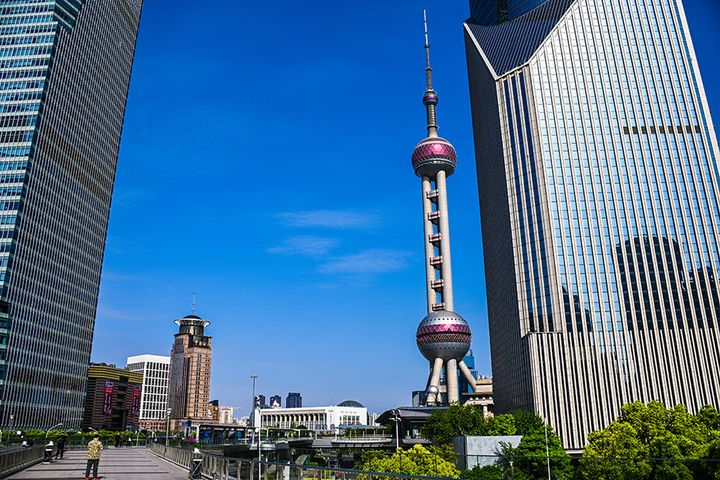 A  report, jointly issued by the China Strategic Culture Promotion  Association, the Economic Media Association of China, the Wanbo New  Economy Research Institute and Yicai Research Institute on May 11, assessed and  researched the business environments in China's top 100 cities based on  gross domestic production and an array of other factors.

The  business environment index comprises both hardware and software. The  former includes the sub indicators of the natural and infrastructure  environments, while the latter consists of the technical innovation,  talent, financial, cultural and living elements.

Shanghai  ranks second in both the soft and hard indexes. The city was among the  top three for five sub-indicators, including the infrastructure, talent,  technical innovation, cultural and financial areas, but the eastern  Chinese metropolis ranked first in infrastructure and culture.

The  natural factors of air quality, climate and ecology and forest coverage  relegated Beijing to a lower rung on the hard ladder, though it stands  above the rest on the soft one with its significant edges in talent and  finance, in both of which categories China's capital tops the list.

Placing  third in the business index, Shenzhen, which heads the country in the  soft technical innovation environment, also comes out top dog in the  hard arena. In the talent area, great space for improvement lies latent  in the many local universities and their graduates.

Shanghai is more competitive than the other two cities because of its comprehensive strength. The  eastern financial hub and port city "exceeds others in its cultural  tableau because it has an open spirit receptive to novelty," the report  noted.

Shanghai  ranks first in the infrastructure and cultural environments and is  among the top three in the talent, technical innovation and financial  fields. The cultural milieu, which has become a closely-watched metric,  has now become a must-have in improving a city's business appeal.

Cultural  soft-power significantly impacts business environment, even as cities  focus mainly on finance, talent and technology, the report noted.  Innovative firms consider more whether a city has a free and open  cultural scene when selecting the home for their office, even over and  above its geographical location, infrastructure and favorable tax and  land policies. In addition to the natural environment and social  security polices relating to household registration and housing,  innovative talent also weighs whether a city has a good cultural and  communications atmosphere when choosing where to settle.

Competitive  neutrality has also emerged as a new benchmark for business  attractiveness, said experts attending the press briefing for the  report's release. Rule of law and internationalization are also critical  factors.

The  principle of competitive neutrality, which does not apply to non-profit  and non-commercial activities, requires tax and lending neutrality,  certain rates of return, regulatory non-bias and full-cost pricing. This  means that the government, as the custodian of the public sector,  cannot exploit its legislative or financial power to gain a complete  competitive advantage over rivals in major private sector business  activities.

Optimizing  the business environment should no longer rely on conventional  development paths or models but instead defer to the principle of  competitive neutrality and internationalization, Ge Dongbo, the director  of the small and medium enterprise office at Shanghai's Commission of  Economy and Informatization, said at the seminar.

Rule  of law is fundamental to a stable, transparent, fair and predictable  business playing field, and innovation is a key indicator of the  sustainable development of a good business environment, said Wu Sikang,  director of the Shenzhen government's development research center.

Shenzhen  pays special heed to establishing the rule of law and an administration  on that basis, bolstering the protection of intellectual property and  further standardizing the company law enforcement system, Wu said.

The  southern megacity home to over 10,000 high-tech businesses is quite an  active incubator of innovation, having come up with half of the numerous  technical innovations that China contributed to the fifth-generation  wireless network technology.