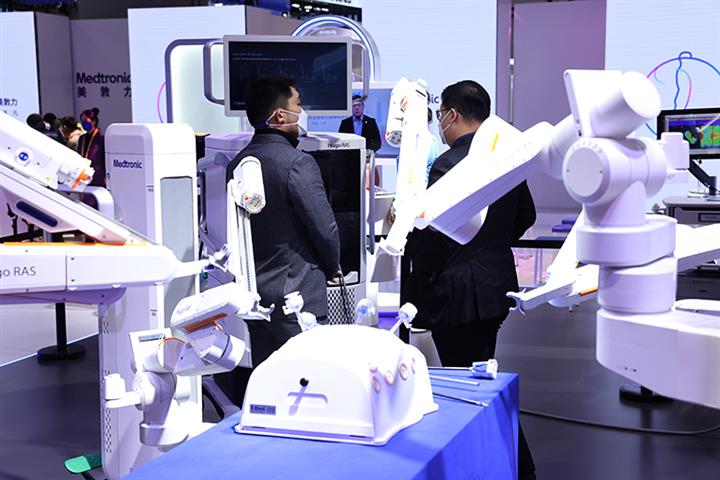 US Medtronic brought to China for the first time its Stealth Autoguide, a neurosurgical robot still pending registration and approval in the country, at the CIIE. It also displayed the Mazor X intelligent navigation robot used for spine surgery and announced the company will start local production in China.

Surgical robots are the future of precision, intelligence, and standardization in surgery, said Gu Yushao, Medtronic's senior vice president and president for China. The development of surgical robots in China reflects the increasing digitization of the medical industry, Gu added.

The base for surgical robots is safety and efficacy, with efficiency and affordability determining their readiness for large-scale application, Lin Mao, senior business director of Medtronic's intelligent devices and neurosurgery division, told Yicai Global.

China does not have surgical robot procedures in its health insurance, while some local governments do. In September last year, Beijing included robot-assisted orthopedic surgery and disposable supplies in its local health insurance. In April 2021, Shanghai added the Da Vinci Robot for lumpectomy surgery to its medical insurance.

There are still many challenges for the clinical application of surgical robots in China, with prices being the biggest concern, Gu Jianying, vice president of Zhongshan Hospital of Fudan University, told Yicai Global. Patient acceptance of robotic-assisted surgery and standards of products and related laws and regulations still need to be improved, she added.