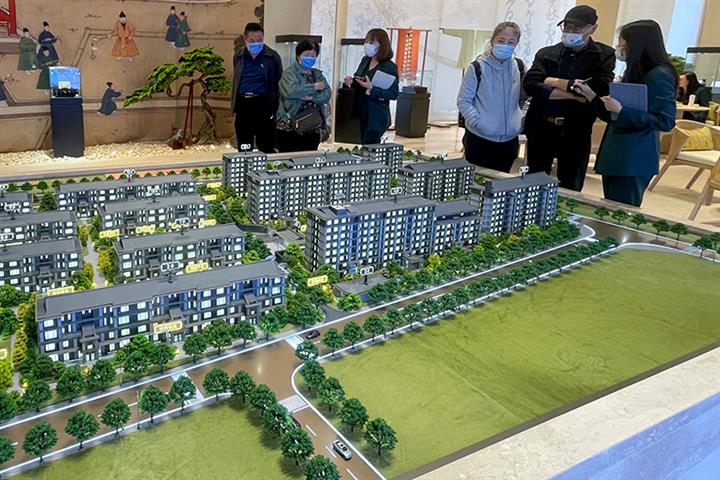 (Yicai Global) Oct. 24 -- The decline in sales of homes in China slowed in the first nine months of the year, analysts said, indicating that the government’s property market relief measures have begun to have effect.

The total area of commercial housing sold in the three quarters ended Sept. 30 fell 22.2 percent from a year earlier to 10.14 trillion square meters, according to data the National Bureau of Statistics published today. Compared with the drop in the first eight months, the cumulative decline narrowed by 0.8 percentage point for two straight months. The value of homes sold fell 26.3 percent to CNY9.94 trillion (USD1.37 trillion), the data showed.

The decline in the area of housing sold in the past two months seems to be slowing, Li Yujia, chief researcher at the housing policy research center of the Guangdong Urban & Rural Planning and Design Institute, told Yicai Global.

It is not only related to last year’s low base, Li said, but also indicates that the early steps taken to help the property market -- such as the cut in the loan prime rate in August, easier down payment requirements on second homes in popular cities, and higher lending quotas for provident funds in many areas -- have had a positive impact.

But the decline in value of commercial housing sales was greater than that in the sales area, with prices still facing downward pressure. House prices fell in more cities in September, according to NBS data on 70 large and mid-sized cities.

The recovery in new home prices in popular cities slowed in September, and prices of new properties in first-tier cities fell for the first time this year, dipping 0.1 percent compared with an uptick of 0.1 percent the previous month.

“The current downward trend of the new housing market has not significantly improved, but the decline in the interest rate on first-time mortgages will help boost demand,” said Chen Wenjing, a market research director at the China Index Institute. “Cities will likely adjust rates on first-time home loans according to their own conditions in the fourth quarter to better restore overall market expectations.”

But in hot real estate markets such as like Beijing, Shanghai and Chengdu, the price of pre-owned homes continued to pick up, with prices in Shanghai rising 0.5 percent from a month earlier to rank first among the 70 cities.

Sales of pre-owned properties respond better to policies than do those of new homes, according to Sinolink Securities. With the recent introduction of ‘transfer with mortgage’ for lived-in homes and other businesses, many cities have improved transaction efficiency with lower buying costs, gaining positive feedback in the pre-owned housing market.