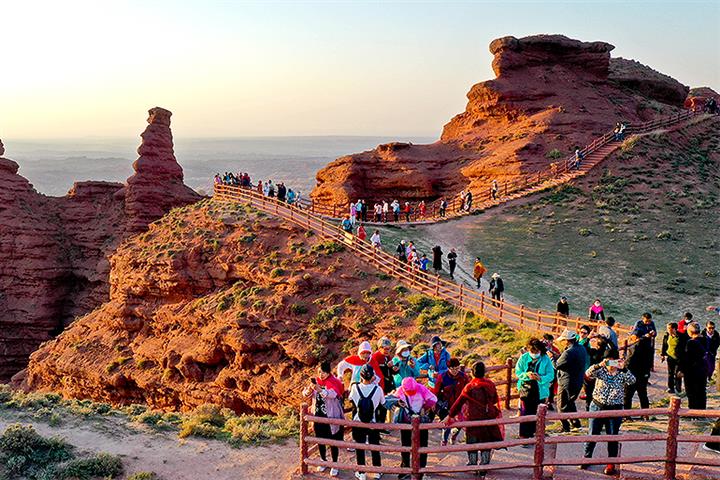 (Yicai Global) Sept. 22 -- China’s revenue from domestic tourism over the Mid-Autumn Festival climbed back to 80 percent of what it was in the same period of 2019, before the outbreak of the coronavirus pandemic.

Income from tourism hit CNY37.1 billion (USD5.8 billion) during the holidays, which this year fell between Sept. 19 and yesterday, according to data the Ministry of Culture and Tourism released today.

Over the three-day break, 88.2 million tourist trips were made, also reaching 80 percent of the pre-pandemic level. Short-distance tour bookings accounted for 56 percent of the total, higher than those during the Dragon Boat Festival and Qingming holiday, per a report from China’s biggest online travel site Trip.Com.

Beijing was one of the most popular destinations during the Mid-Autumn Festival, which is also called the Moon Festival, thanks to the opening of Universal Beijing Resort on Sept. 20. Tickets sales for the theme park topped the world for a single scenic spot after just 10 seconds. Opening-day tickets sold out in just one minute, while bookings exceeded 10,000 in three minutes.

China’s box office takings during the festival reached CNY470 million (USD73 million) as of 7 p.m. yesterday, close to the amount recorded in the same period of 2016 and 2018, and just over half of 2019’s CNY800 million, according to data from ticket sales platform Maoyan Entertainment.

The Ministry of Commerce has brought out 14 measures to promote consumption, after spending plunged last month due to floods and a resurgence of Covid-19. They covered several areas, from used cars and home appliances to furniture and home decorations as well as subsidized travel.

August and September are the peak months for consumption in China, Guotai Junan Securities said in a report on the new policies. After poor figures in the last two months, it is especially important to help sectors such as accommodation, catering and cultural tourism, it said, adding that consumer demand is likely to rebound in the future.