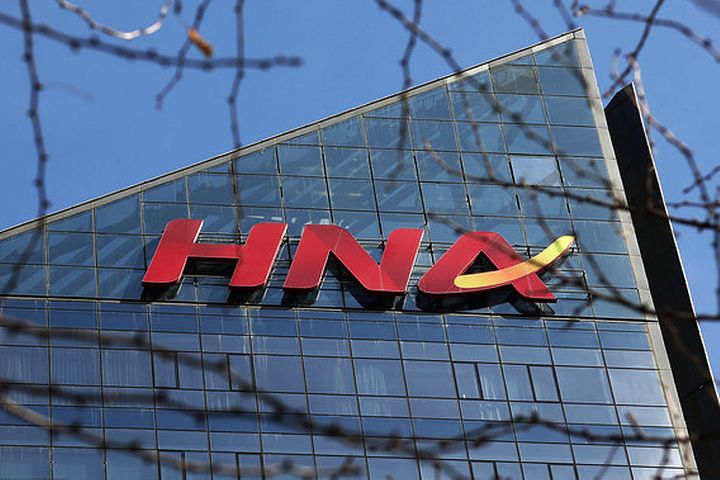 (Yicai Global) Dec. 3 -- HNA Group has secured a CNY4 billion (USD569 million) joint loan to pay the daily operating costs of the company and its affiliated airlines, which will help the high-rolling HNA avert risks and maintain the growth of its core airline business, the group said in a statement yesterday.

The spendthrift company, which has run into turbulence in recent years because of an overseas realty shopping spree, has also agreed to shift its controlling share of local budget carrier West Airlines to a state asset management firm under western China's megacity of Chongqing, but HNA will retain control of the unit's operations.

These are the latest efforts by the Haikou, Hainan-province-based aviation, real estate and tourism conglomerate to stave off a capital crash after its too-swift expansion abroad.

A syndicate of eight banks signed a joint credit agreement with the cash-strapped group, with each lending CNY500 million (USD71 million).

The lenders include two major policy banks, China Development Bank and China Exim Bank, Industrial and Commercial Bank of China and five of the country's other largest commercial banks. HNA, its founder Chen Feng and Chief Executive Tan Xiangdong will stand as guarantors.

The three-year loan, which bears unalterable 4.75 percent fixed annual interest, will be used to pay for aviation fuel and materials, take-off and landing fees, wages, aircraft rentals and other operating expenses of the company and its affiliated airlines, per the statement.

HNA inked the other agreement for restructuring yesterday with Chongqing Yufu Assets Management Group, which will take an at least 70 percent portion to become the largest shareholder post-restructuring. Neither side offered specific financial details of the deal, however.

Yufu already indirectly holds 40 percent of West Airlines' equity, while HNA owns the rest. Hainan Airlines, the listed aviation company under HNA, announced its plan to take over West Airlines in June last year, but Yufu opposed the takeover on the grounds of horizontal competition, thus causing the deal to fall through.

HNA has previously yielded its control of Urumqi Air, Capital Airlines and Guangxi Beibu Gulf Airlines to other local governments under similar arrangements.

The company and its subsidiaries have flogged many other of their domestic and foreign assets because of straitened circumstances, but still have not been able to exit their financial plight. The parent's Grand China Air unit defaulted on a CNY1 billion privately-placed bond after its maturity just last week.

Cash constraints also prompted the group to sell an office building last month that was home to Credit Suisse in London's Canary Wharf area. HNA, which earlier unloaded another office block in the gentrified former East End dockland, will own no UK property post-sale.

Yufu is a key platform for the disposal of non-performing assets of city enterprises and the operation of state-owned assets and a pilot firm for reforming state-owned capital operation, according to the website of the Development Research Institute of the State Council.