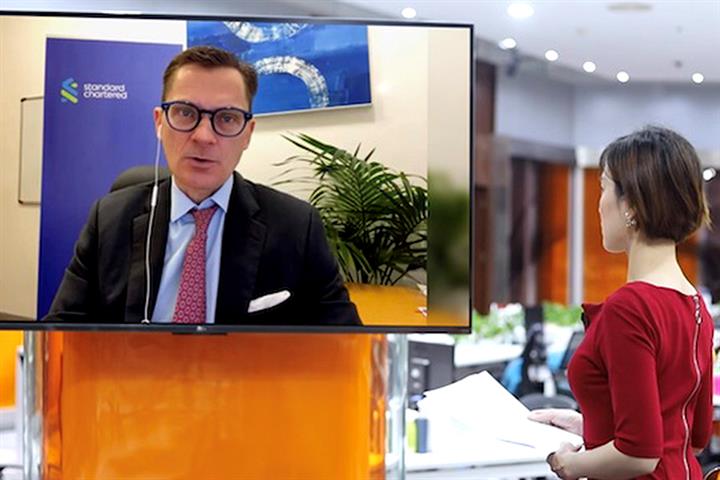 (Yicai Global) Nov. 24 -- The worst economic slowdown will happen in the first half of next year, according to the chief strategist of UK lender Standard Chartered Bank.

A recession is expected to impact major economies, including the UK and the Eurozone, with minor effects in the United States, Eric Robertsen, who is also Standard Chartered’s global head of research, told Yicai Global yesterday. “This is a recession that is coming along with very high levels of inflation, and the proverbial stagflation scenario is something that I think is very unfamiliar to most market participants.”

“But there will still be some very good pockets of growth around the world,” Robertsen added. “The Association of Southeast Asian Nations, for example, is expected to have a reasonable growth outlook, and there are also certain parts of the Middle East, like Saudi Arabia and the United Arab Emirates, were largely because of oil revenues, we are seeing very good economic growth.”

The depth of the recession is much greater than anticipated, according to Robertsen.

There are risks that central banks are forced to hike monetary policies throughout 2023 and that inflation is becoming a structural problem rather than just a cyclical problem, he noted, adding that despite energy prices declined in the past couple of months, they can return on the rise because of geopolitical reasons and supply chain problems.

The uncertainties of central banks, especially the US Federal Reserve, are also adding risks to the global economy. For the countries and companies that issue US dollar-denominated debts, the dollar strength and currency weakness make the cost of servicing debts much more expensive, putting additional strain, Robertsen pointed out.

The inflation in the US is mainly caused by a demand shock, meaning that there is an excess demand created by monetary and fiscal stimulus, Robertsen noted. As the US is experiencing demand-led inflation, monetary tightening should work to reduce inflation, but it is taking longer than anybody would have expected, he said.

Robertsen believes that the minute the market starts to look at when the Fed may stop raising interest rates, the dollar will begin to weaken, as the relation between the two is very strong.

The Fed will raise rates by 50 basis points in December and then increase the rates only one more time by 25 bips early next year to below 5 percent, Robertsen predicted. The unemployment rate will jump to 4.2 percent by the end of the first quarter of 2023 and to 4.3 percent by the beginning of the second quarter, when the job market cooling will likely restrain consumer spending and ease inflation.

If we assume that inflation will stabilize or even starts to calm down and that central banks start to slow the pace of rate hikes or stop next year, then we may go back to a world the correlation goes back to negative, Robertsen noted.

Looking at March 2009 and the next six months, the top-performing asset classes were the worst-performing ones in the previous two years, he said. So in some ways, 2023 could be a year of recovery for the most beaten-down assets, including emerging market credits, equities, and currencies that have had a tough time.

“I would want to have extra cash in my portfolio so that if there are opportunities created by the volatility, you have the ability to add geoposition and increase the investments in markets or asset classes that you think they are attractive,” he added. “So maintaining a bit of conservatism even if you start increasing risks, I think it would be the right solution for 2023.”