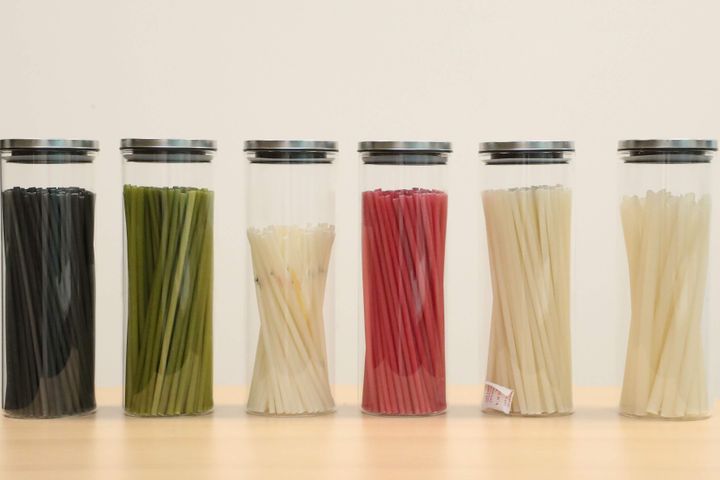 "These straws are edible," said Kwang-Pil Kim, the CEO of Yeonjigonji. The company, based in Seoul, South Korea, has developed what are undoubtedly the world's first drinking straws made from rice. "You can throw them away if you don't want to eat them," he said. "Simply put them in a flower bed, or in a fish tank."

Yeonjigonji's rice straws are harder than typical plastic straws and smell a little like rice, but do not affect a drink's taste in any way. They are made of seven parts rice flour and three parts tapioca powder. The innovative product was born from concerns about the impact of plastic straws on the environment. South Koreans use approximately 2.6 billion plastic straws every year.

Kim took over Yeonjigonji (Korean for "red rouge on a bride's cheek") in 1999. The company was originally founded by his parents to manufacture and distribute traditional bridal shoes. Kim managed the firm for 15 years but was not able to make ends meet, finding wedding shoes to be a dying industry.

Searching for a new business productin early 2017, he stumbled upon an article about an American startup, Loliware, that was developing edible cups. He wondered, "If they can make an edible cup, couldn't we make an edible straw?" He started studying materials that would allow him to create such an item. "I thought about ingredients that South-Koreans don't generally dislike. Rice immediately came to mind," he said.

Kim decided to manufacture his product in Ho Chi Minh City, Vietnam's largest city. He chose to use Vietnamese rice because Korean rice is stickier, which makes it harder to produce straws. Also, he wanted to lower the production cost to compete with plastic straws by benefitting from the cheaper price of rice and lower labor costs in Vietnam. After one and a half years of research and trials, he succeeded in creating the rice straw in August 2018. Currently, some 500 million straws are produced each month at the company's factory.

One of the biggest advantages of these rice straws is that they are biodegradable. While it takes as long as 200 years for an ordinary plastic straw to decompose, leaving plastic microbeads behind, a rice straw takes 100 days at most. "When I put a rice straw into a fish tank at home, fish nibbled away the straw in less than a month," Kim said. In an experiment held by one of Kim's partners in Indonesia, a rice straw decomposed in seawater in just eight days.

However, these eco-friendly straws come with a higher price tag. Each rice straw costs up to 35 Korean won (around USD 0,03), whereas the retail price of a plastic straw is about one-sixth that amount. The price is what currently blocks the rice straws from being widely used within the country. "If we can produce 2 to 2.5 billion rice straws a month, we'll be able to cut the production cost by around 120 percent," Kim said.

He pointed out that another plastic alternative, paper straws, are not ideal. "You need to cut down trees to make paper straws, so they are bad for the environment, too," he said.

Consumers, who have long enjoyed the convenience of plastic straws, may find rice straws inconvenient to use at first. However, a considerable amount of people is willing to put up with inconvenience for the sake of the environment.

Jeong-Eun Mo, owner of a café in Jeju Island, has been using the rice straws since early this year. "Customers have given more positive feedback than I expected," she said. "Living on an island, I frequently see litter on the beach. I'm proud to be able to do a small thing to help reduce waste."

Kim's journey to develop the environmentally friendly product coincides with a bigger movement against plastic straws. In October 2018, the European Parliament approved a ban on single-use plastic, including straws, starting in 2021. In January 2018, China banned imports of recyclable waste such as plastic or paper, leading to a waste crisis in South Korea and other countries. Urgently needing to find a solution, last August the Korean government imposed a ban on single-use plastic cups in cafes and fast-food restaurants.

Straws are just the beginning. Yeonjigonji has also developed disposable cups, forks, spoons, knives and bags made of rice, and is planning to sell these products in South Korea and abroad as early as April 2019.