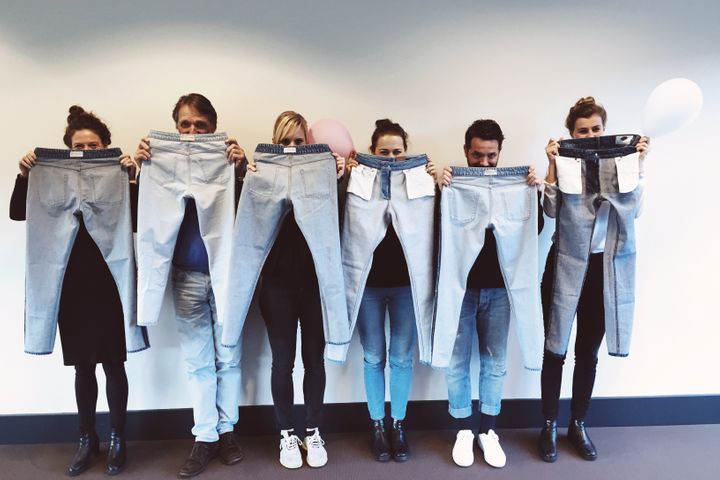 (Yicai Global) Oct. 27 -- Despite the name, MUD Jeans is anything but dirty. In a business with a history of scandals, from child labor to hazardous processes such as sandblasting, this modest Dutch company aims to make good-looking jeans that are ethically and ecologically sound.

"Fashion is the second biggest polluter in the world," said 56-year-old chief executive Bert van Son, who has worked for 35 years in the clothing industry. "Some 24 billion tonnes of cotton are made every year, and 24 percent of all insecticides and 11 percent of pesticides are used on cotton. It's totally out of hand. We need to use organic cotton—which doesn't pollute the water—or recycle cotton like paper."

And so MUD Jeans gives shoppers a unique opportunity: for a one-time €20 membership fee, you can "Lease A Jeans" for €7.50 a month (around US$9), paying €90 in installments as opposed to €98 to buy a pair of jeans outright.

After a year, you have three options. You can keep your MUD jeans (the company will repair leased jeans free of charge), you can return them for recycling, or you can trade them in for a new leased pair. A €10 voucher towards a new pair is given to people who return any brand of jeans, which MUD Jeans patches and sells as "vintage." If the jeans are beyond repair, the company sends the fabric to a factory in Spain for recycling.

The company sells jeans online and through 260 shops in 27 countries, allows retailers to place small orders to avoid overproduction, and never holds sales. Today some 2,000 of MUD's customers rent their jeans, making up a quarter of sales. According to van Son, their average age is 35, they tend to be well educated, have children, enjoy traveling, eat organic food and welcome new experiences. He noted that 80 percent of customers send back their old jeans for recycling, whether they lease or purchase them.

A typical pair of MUD Jeans, like the Regular Dunns that he is wearing, consists of 23 percent recycled jeans, 75 percent organic cotton and 2 percent elastane. It is colored using non-toxic indigo dye and has a printed, rather than leather, label to make recycling easier. The jeans are produced in Tunisia at the Yousstex factory, whose working conditions have been audited by the Fair Wear Foundation.

MUDs' leasing concept was the start of a turnaround for an eco-fashion firm that van Son rescued from bankruptcy in 2012. "We started with 'Lease A Jeans' in January 2013 and that brought us immortal fame as a company because it was such a crazy idea," he recalled, sitting in his office and distribution center in Almere, in the Netherlands. "Leasing and jeans together are not fashionable, don't fit, and that's why it's so interesting."

The initiative attracted the attention of the London-based Ellen MacArthur Foundation, which profiled the way the company "seeks to close the loop on jeans production" and has just launched its own circular fibers initiative to encourage retailers to design textiles for reuse. "Crucially," the text reads, "[van Son] understands the resilience that circularity could bring to his business, and how this will become an even greater competitive advantage in the future."

Reached by phone, a foundation spokesperson said the MUD leasing model should be more widely adopted, given that today's take-make-dispose approach to fashion creates high levels of pollution and waste—and many clothes are used only a handful of times before being discarded. By sharing clothing among different people, renting increases the number of times each item is used.

There are challenges to MUD's approach. Recycled cotton is more expensive, the business has struggled to keep up with demand that has doubled year after year, and value-added tax charged upfront affects cash flow, as does the leasing concept itself.

And although MUD Jeans has made global headlines, is a Certified B Corp, and has won multiple sustainability awards with its rental idea, those distinctions didn't initially translate to sales. "You can have a great story and be as sustainable as hell, but if your product is not fantastically good, at a good price, and widely available, it doesn't mean anything," said van Son.

The company received a recent infusion of cash and know-how when three skilled investors bought shares: a denim "guru," a sales manager and a social media marketing specialist. MUD has a working capital credit line with Triodos Bank (a bank that finances projects for positive change) and a loan from the DOEN foundation. The company expects to break even with €1 million in sales in 2017.

"You can do a lot with water, clay and sand—put it on your face, build houses, then turn it back to MUD," mused van Son, covering a fresh pot of tea with a MUD Jeans cozy made by his 88-year-old mother from old jeans and a coat. "And out of the MUD, a beautiful lotus flower can grow."