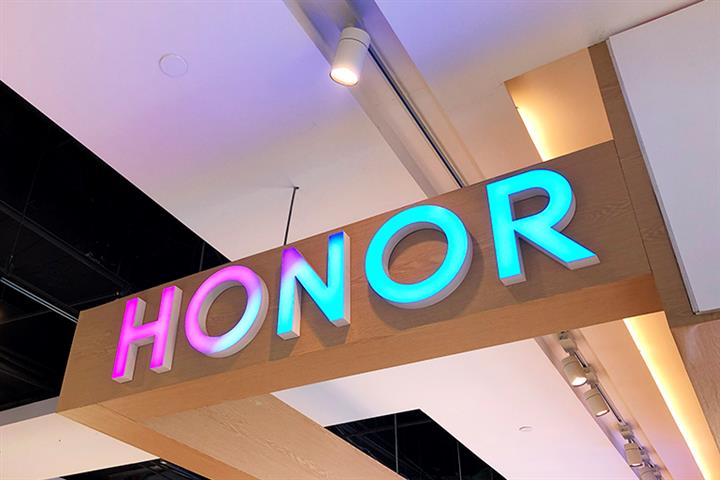 (Yicai Global) Dec. 2 -- China’s Honor smartphone brand is hastening to open offline channels to restore its supply at sales points after it calved from its former parent Chinese tech giant Huawei Technologies. Chipmaker Qualcomm also recently confirmed that it is in talks with Honor.

The next step for Honor will be to widen its offline channels, its senior team stated in a recent internal strategy meeting, Tencent reported today. Honor did not formally respond to this claim, but it is indeed shaking up its domestic channels and speeding up the coverage of offline channels via agents, insiders told Yicai Global.

Shenzhen Zhixin New Information Technology, backed by several Huawei suppliers, acquired Honor’s mobile phone terminal business from Huawei on Nov. 17. Huawei now no longer holds a stake in Honor after the acquisition concluded. Over 30 Honor agents and distributors joined to set in train the buyout in a self-benefit initiative by Honor’s industrial chain, Huawei said in a recent statement.

Honor has reportedly opened several offline stores since September in Chengdu, Lanzhou, Wuhan and Xiamen and in many other cities, with more to open soon.

“Qualcomm is very pleased with the emergence of a new participant in the market. It will bring more consumption potential to the market and consumers will like it. I like the vitality of the Chinese mobile phone market and hope that Honor can bring more good products. But now everything has just begun, and we will also have a dialog,” Amon said.

Honor made up nearly half of Huawei's mobile phone sales in last year’s first quarter and claimed about a quarter of the Shenzhen firm’s global shipments and around one-third of Huawei’s domestic sales in this year’s third quarter, Jia Mo, an analyst at Singapore-based global technology analytics firm Canalys, told Yicai Global. The resumption of channels and supply chains is expected to cement Honor's market share, he added.

Founded in 2013, Honor helped turn Huawei into the world’s second-largest smartphones supplier last year. Itself buffeted by a US ban on microprocessor sales to it, Huawei did not want this to also drag down Honor and its distributors in 170 countries, Ren explained on Nov. 27. After this “divorce” the two companies should strive to achieve their own goals and comply with international rules on their own, he added.