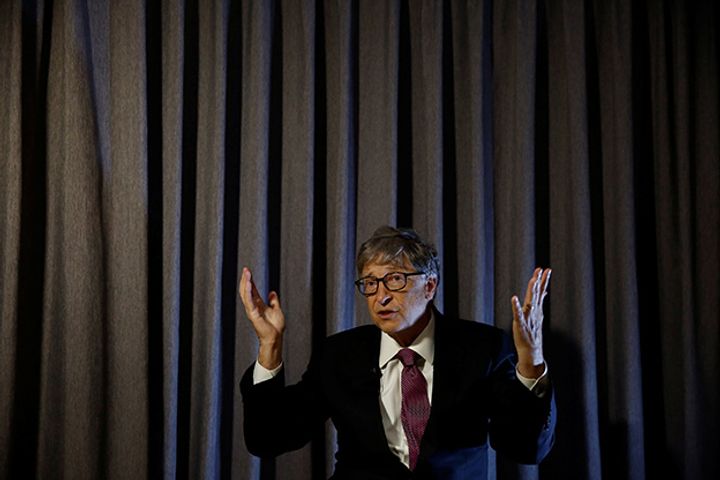 (Yicai Global) Nov. 12 -- Revolutionary technologies will emerge in the fields of artificial intelligence, biotechnology and in ways to deal with climate change in the coming 10 years, Bill Gates said in an exclusive interview with Yicai Global.

Not surprisingly, scientific and tech breakthroughs were among the topics Gates discussed with Chinese software engineers and biologists on a four-day trip to China last week, where he attended the inaugural China International Import Expo in Shanghai.

"When are robots coming? How smart will computers be?," Gates said, repeating some of the questions posed and pondered. "If you forced me to pick one thing, I would still put that [AI] at the top of the list."

Biotechnology ranks second on his list of revolutionary technologies. As countries become more developed, people may cure cancer, extend the human lifespan, solve tough brain diseases like Alzheimer's, as well as non-infectious ones such as diabetes, he said.

Thirdly, Gates predicts radical innovations in controlling climate change, which "requires us to innovate in many parts of the economy, not just in electricity but also how we transport, how we make industrial materials like cement and steel.

"This idea that we're going to get to zero emissions and that there's almost a deadline to try and do that in less than 50 years, that's also super interesting. We need super-smart, young, breakthrough thinkers to be engaged in that," he added.

To tackle challenges in the energy sector, Gates has started the Breakthrough Energy Ventures, which focuses on environmentally minded startups and counts businessmen such as Alibaba Group Holding's Jack Ma and Facebook's Mark Zuckerberg as its backers. Gates has also established an energy firm specializing in nuclear development.

During his Nov. 7 interview with Yicai Global in Beijing, the Microsoft co-founder and co-chair of the Bill & Melinda Gates Foundation also spoke about global health, development and poverty alleviation, and said he supports China in playing a more active role in international affairs. The Gates Foundation attaches great importance to promoting China's experience in poverty alleviation, hygiene and health in other countries, especially in Africa.

Africa faces big challenges such as disease, climate change, some immaturity in the quality of the governance, Gates said, acknowledging that the continent has more than 50 countries so different regions vary a lot.

Gates commented on China's declaration and action plan at the Forum on China-Africa Cooperation held in Beijing in September, particularly applauding efforts to eliminate malaria and improve agricultural productivity. "We were really glad to see malaria called out in the communiqué, because that's a huge area for us," he said.

China has strengths in the field because the malaria drug 'artemisinin' was discovered in the country, Gates added. Chemist Tu Youyou was jointly awarded the 2015 Nobel Prize in Medicine for her discovery.

"There's a great synergy that when China says, 'OK, how can we help these African countries? What is it they want?,' agricultural productivity and malaria are on the list," Gates said.

The China-Africa relationship is long term and China has established a close and strong link with the continent, Gates said. China is a middle-income country, so there's a lot that China can help Africa with, he added.