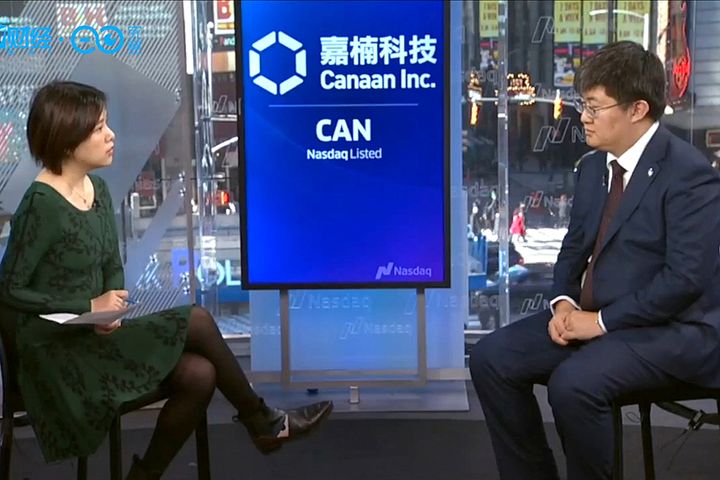 (Yicai Global) Nov. 25 -- Canaan, the world's second-largest maker of Bitcoin mining machines, only does business that makes a profit, according to founder and Chief Executive Zhang Nangeng.

Profitable since 2015, Hangzhou-based Canaan debuted on the Nasdaq Stock Market on Nov. 22 after raising USD90 million in its initial public offering. The listing followed failed attempts to go public in the Chinese mainland and in Hong Kong. Canaan priced the shares at USD9 each, the bottom of its marketed range.

Now the firm is bracing for new demand from customers seeking to replace or upgrade their Bitcoin mining machines next year.

Zhang sat down with Yicai Global in the US recently and shared some of the latest developments at the inventor of application-specific integrated circuit mining machines.

Yicai Global: Canaan had setbacks in going public on the mainland and in Hong Kong. What do you think about its future development after listing on the Nasdaq?

Zhang Nangeng: The most important thing for a company is business and the capital market is a good supplement. We feel that investors in the US are more aware of the blockchain, artificial intelligence and chip businesses. Canaan does not position itself as a mining machine company, but a chip and AI technology company. I hope that our own strengths can be understood.

Bitcoin will be halved for the third time next year, which is a huge opportunity. Customers' need to replace and upgrade miners will be massive since halving means two times the difficulty in mining. The opportunity will be big from next year's second quarter to mid-year. We will have enough funds to do this after the listing.

YG: Even when miner sales were very good, you decided to give up hardware and focus on chips instead. That seems to be a very risky choice. Why did you do it?

Zhang: Our customers were mainly geeks in 2013. This group has a strong spirit of open source and sharing, which is also the spirit of the entire cryptocurrency community. I thought making the market bigger was more important then and open source was a very correct decision.

YG: Canaan's share price has not been very satisfactory. What's your view?

Zhang: Our company has been profitable since 2015. Today's market environment is not good and so it's okay if we set our price lower. In fact, Canaan still has a long way to go. ACIS technology belongs to the subdivision of crypto mining and boasts large potential to change the world.

In addition, we must make profit in running a company. Our company does not do business that is not profitable, and we must explore opportunities in new areas.

YG: How does Google's quantum computer affect your technology? Will there be a disruptive effect on Bitcoin?

Zhang: There is a consensus in the industry that quantum computers will not be mature enough for use in the next 10 years. Also, Bitcoin itself has some pre-designs that are anti-quantum computer. The funds will not be transferred when a wallet address is exposed. This will not happen in theory.