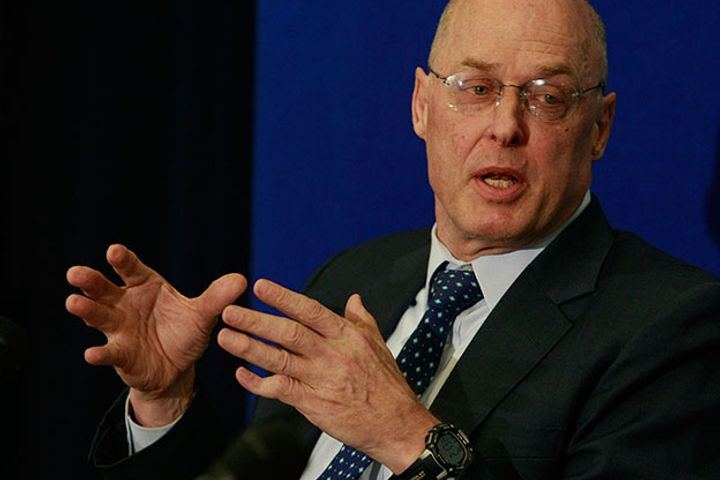 [Exclusive] Trump's Visit to China Will Be a Success, Former US Treasury Secretary Henry Paulson Says

(Yicai Global) Nov. 2 -- US President Trump's first state visit to China will be a successful one, Former US Secretary of the Treasury Henry Paulson told Yicai Global. He defines 'success' in terms of both sides being able to make some headway with North Korea's nuclear program, rebalancing bilateral trade and Chinese market deregulation.

Yicai Global: What are your expectations of President Trump's forthcoming visit to China?

Paulson: I expect it to be a successful and positive visit. The Chinese and US leaders have developed a healthy friendship, and I predict and hope that they will make headway with the North Korean nuclear program and on trade and economic fronts.

Of course, it would be very difficult to solve the most fundamental issues. They can't be tackled in just one visit. Trade issues are very challenging too. China and the US are competitors, not only on the national security front, but also on the trade market. On the other hand, the pair shares many common interests. US-China relations are the most important bilateral relations in the world, so both countries need to cooperate with each other if they want to solve the differences.

For these reasons, I expect President Trump's visit to China will be a success. It'll be a positive and constructive visit as long as the two sides continue to work on North Korea's nuclear threats and many other issues. Besides, US-China trade needs to be rebalanced, and I hope to see the Chinese market open further.

Yicai Global: What do you think of China-US relations today and the subtleties involved?

Paulson: Relations between the two countries are the most bilateral relations in the world, and we should never let these relations go out of control.

Many countries share common interests with respect to global stability and peace and international rules, and we need to maintain stable world order. If the US and China can reach a consensus on the major issues, it will be easier to solve these problems.

On the one hand, many Americans now think that China is already an economic power, so why can't it be more open to foreign companies? They demand "reciprocal openness," and a growing number of economies are calling on China to further open up its markets.

Anti-globalization practices are another factor affecting US-China relations. Anti-globalization movements have occurred in many countries, where automated production lines are replacing manual workers, resulting in wage restraints. Even in plants in China's coastal cities, we saw more and more robots and automatic facilities.

In the West, however, rising unemployment among middle class workers and pay cuts can't be explained by factory automation, so they blamed it on international trade. Most politicians are using globalization as a scapegoat.

Yicai Global: You initiated the China-US Strategic and Economic Dialogue (S&ED) as Secretary of the Treasury in Sept. 2006, and it became an important communication mechanism between the two countries that played a major role in promoting bilateral ties. But the mechanism has changed since the new administration took office. So, what do you think of the China-US dialogue mechanism today?

Paulson: The S&ED is a very useful tool. It keeps a balance in US-China relations and reduces frictions. It brings the countries together to work on and address difficult long-standing issues. Such a mechanism is very helpful.

The current program is called US-China Comprehensive Economic Dialogue (CED). It was called S&ED back in the Obama administration, but they are very similar. The world now is different from the time when I served as Secretary of the Treasury. US-China relations have become more complex and more difficult, because of the competition between the US and China on security and economic matters.

As China's economy continues to grow, US-China relations will become more important. Many challenges in the world today -- such as denuclearization, nuclear proliferation, environmental issues, terrorism and sustainable economic development -- can't be solved unless the US and China cooperate with each other.

So in my opinion, [dialogue] is still the best mechanism, and the key is how to use it.

Yicai Global: How can China and the US strengthen cooperation and manage differences in future?

Paulson: The two countries should set some easily attainable targets to bolster the peoples' confidence, and we must trust each other. The leaders of our countries have struck up a good friendship between them.

China and the US can collaborate in many areas. The more collaborations, the closer our ties. I'm very optimistic despite the problems. Needless to say, we also need to be realistic. Fostering bilateral ties takes time. For me the positive aspect [of the situation] is that there were little strains in US-China relations 30 years ago, because the size of bilateral trade was pretty limited back then, but the bilateral economic ties are more complicated, so by definition such economic ties are strained to a certain extent.

Yicai Global: What's your opinion about economic development in China and the US today, especially given the fact that the US's fiscal deficit has reached USD666 billion and hit a new high since the fiscal year of 2013?

Paulson: When I was Secretary of the Treasury, people believed that China's economic growth should be based on consumer spending, instead of being driven by government spending, which was the case in the past.

What people failed to recognize is that the consumer spending growth in China has outpaced investment. Net exports' contribution to gross domestic product growth is small relative to consumption, and this is an encouraging sign. Consumption makes up 43 percent of China's GDP, and the figure is still increasing, although it still lower than that in the US at the moment.

Global economic growth is pretty good overall at present, and it is rare to see economies worldwide grow in lockstep. Aside from Brazil, Japan has delivered better-than-expected results, and the US also posted solid growth over the past several months, growing by about 3 percent. China still remains an important growth driver in the world.

Here I'd like to point out, I don't really care about how fast the Chinese economy grows. What I want to see is healthy and sustainable growth. I was very happy to hear that China is no longer pursuing high growing rates as the top priority, because I personally am opposed to driving economic development at the cost of damaging the environment.

Fiscal deficit is the most important economic issue in the US. The country offers many welfare benefits, but its social and population structures mean that the government can't afford such social security programs as Obamacare. Government spending is not invested in young people, education or other worthwhile areas, and this will have an impact on our future.

Failing to rectify this mistake will result in a fiscal crisis. The government system in the US can ultimately correct errors by itself, but the longer it takes, the higher prices we'll pay. If the government doesn't make an investment that it should today, it will do it but at a higher cost in the future. The huge deficit that you mentioned is actually the consequence of rectifying these investment mistakes.