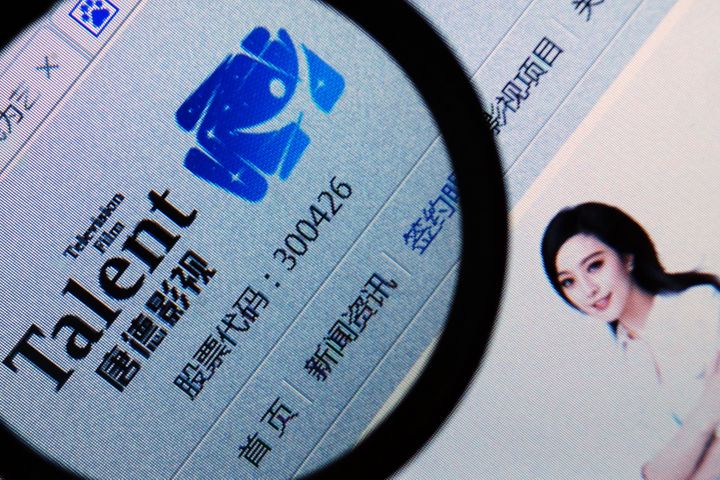 (Yicai Global) June 5 -- Zhejiang Talent Television and Film, which lists Chinese film star Fan Bingbing among its top 10 shareholders, has claimed it operates in accordance with the law and does not sign 'yin and yang contracts' or otherwise engage in tax evasion, it told state-backed news site The Paper.

Shares in the firm [SHE:300426] rallied 2 percent this morning, closing the lunch break at CNY15.14 (USD2.36). The stock dipped nearly 9.6 percent yesterday after a former host at state broadcaster CCTV alleged that Fan failed to pay more than CNY23 million (USD3.6 million) in tax by using a fraudulent dual contract system.

Cui Yongyuan claims that Fan signed a CNY10-million contract for a four-day movie shooting to avoid paying higher tax, while another secret version of the contract added CNY50 million to her remuneration. Her production company denies that either she or it had ever inked such contracts.

Zhejiang Talent announced yesterday that Wu Hongliang, the firm's actual controller, had increased his holdings by purchasing 190,000 shares via centralized bidding at an average price of CNY15.1 a share. The almost CNY2.9-million deal increased his stake by 0.05 percent.

The company has close links with Fan, whose hit TV series The Empress of China made up 71.5 percent of the firm's CNY268-million revenue in 2014, and generated a further CNY190 million from in 2015, more than a third of total income.

Zhejiang Talent also sought to buy a majority stake in Fan's Wuxi Aimeishen Media in March 2016, but the move was later blocked by regulators. Around the same time they unveiled the merger plans, the two firms set up a joint venture, Wuxi Talent Cultural Media, with registered capital of CNY30 million and Aimeishen taking a 51-percent stake.