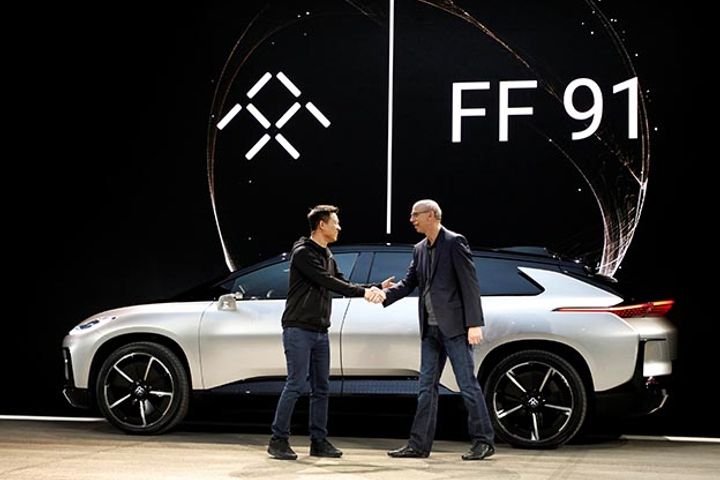 (Yicai Global) Aug. 30 -- Faraday Future, the electric car startup founded by embattled Chinese entrepreneur Jia Yueting, has completed its first pre-production vehicle, a development that may reassure investors and the wider industry that mass production may not be far off.

Jia and some 200 Faraday Future employees attended a ceremony to celebrate the first FF91 luxury vehicle rolling off its Hanford assembly line, the California-based company said in a social media post. Definitions of pre-production vary from company to company, though the term refers to the final stages of commissioning.

A precursor to large-scale manufacturing, the event marked a moment of great importance for the ambitious carmaker, which has imposed a year-end deadline for mass production to begin. If it overshoots, chief backer China Evergrande Group will take control of Faraday Future from Jia. Its carmaking efforts have accelerated across the board following Evergrande's investment earlier this summer, with frequent news updates about research and development and plant construction, along with other changes and milestones.

In preparation for mass production, the company now aims to move ahead with training and recruitment, aiming to capitalize on recent downsizing at Tesla, which has laid off more than 4,000 workers in recent months. Faraday Future has set up a task force to recruit former Tesla staff. At least one senior manager has already jumped ship.

The FF91 debuted at the Consumer Electronics Shows in Las Vegas in January. Despite the flagship model boasting a technical edge over some new energy vehicles, its development has been hindered by the financial problems facing Jia. A series of scandals including the resignation of core employees and payment delays left the company up in the air.

The company itself was in the doldrums until white knight investor Evergrande Health Industry Group, a unit of Guangzhou-based Evergrande Group, agreed in June to invest USD2 billion for a 45 percent stake and to finally get production of the firm's first car underway.

Faraday Future also said it will partner local College of the Sequoias in Hanford to offer relevant technical training to new factory workers. The firm will use the facility as its main manufacturing hub with support from another base in China's southern city of Guangzhou. The Chinese factory will produce five million cars within 10 years, the firm said in a statement earlier this month.