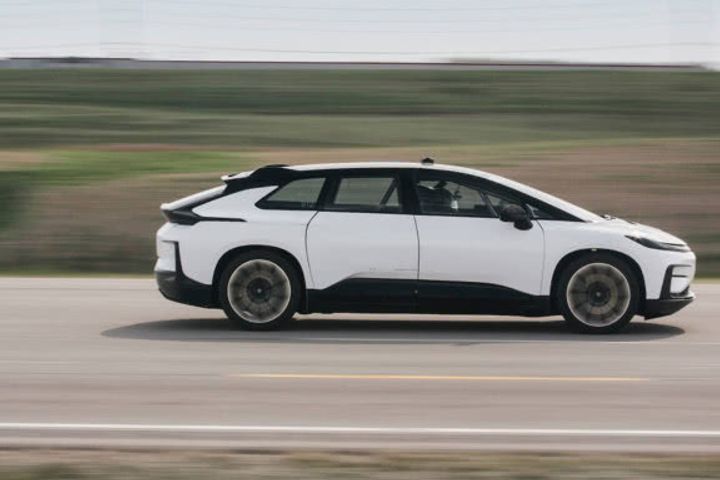 (Yicai Global) Aug. 2 -- With just the body of the FF91 luxury electric vehicle completed, Faraday Future Chief Executive Jia Yueting's great challenge is to get the rest done in time to start deliveries and save his job before a year-end deadline.

The body-in-white prototype has been completed and assembled minus its power transmission system, trim and paintwork, Securities Times reported, citing a statement from the Los Angeles-based auto startup. That accounts for just 40 percent of overall work in terms of mass production, according to an industry expert, the report added.

Success in producing the prototype is not the same as mass production, which may take more than a year, one expert said. But embattled Chinese entrepreneur Jia doesn't have a year. He put control of his company on the line in June when he secured HKD6.7 billion (USD854 million) in funding from Hong Kong property giant Evergrande Group. If Jia fails to hit the year-end production target, Evergrande may take the reins, reports have claimed.

"At this stage, at best, it can only be called an engineering prototype car," the expert said. "The supercar's design, such as its facial recognition door opening, single-shell body structure and panoramic sunroof, will all make the FF91's mass production much more difficult."

A new product usually takes 38 months to 52 months to develop, the head of one carmaker said. "This is still a long way from mass production, and to achieve that by the end of the year will be very challenging."

Whether Faraday Future's California car-assembly plant can go into production as scheduled is another key factor.

Demolition work started inside the factory in Hanford after Faraday took over the former tire retreading plant in March. Initial work started on the internal workshop in May, including foundation laying, ventilation, sewage pipe and circuit installation and commissioning. On-site pictures show that the main equipment is not yet in situ and the facility is still in a disorderly state, the report said.

Faraday Future won a temporary certificate of occupancy for the Hanford facility on July 17, it said, but it must still apply for a conditional and then a final license before it can start production. When Tesla bought a new plant from Toyota and GM in April 2010, it spent two years revamping it, even though the facility was a car factory.

The Hanford compound occupies less than half the area of the Tesla plant and the engineering standards are not as high, but construction time is still expected to last from eight to 10 months. Even if the FF911 is delivered in small batches, it will still pose a major test for Jia.