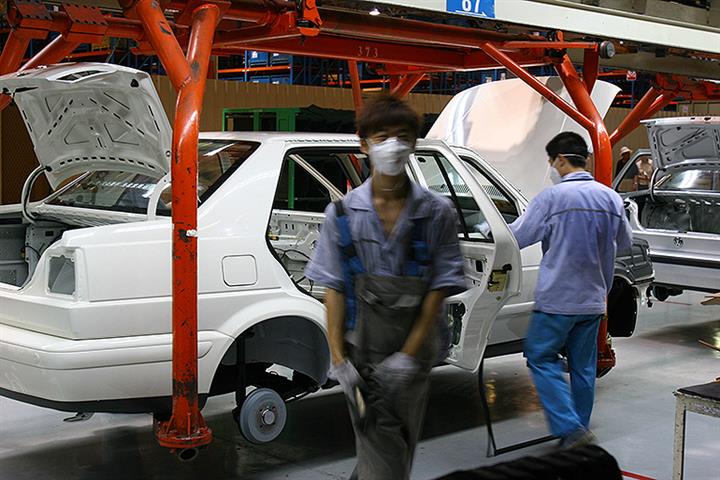 (Yicai Global) May 30 -- FAW Volkswagen’s factory in northeastern Jilin province is getting close to full capacity again after being shuttered for nearly six weeks due to a resurgence of Covid-19 in the region. Despite the setbacks, the auto-making joint venture between China’s FAW Group and Germany’s Volkswagen is pushing for record output to reach its 2022 targets.

"All five production lines are operating again and making over 2,700 finished vehicles a day," Gao Dawei, head of manufacturing at the Changchun base, told Yicai Global. The factory is gunning for record capacity by optimizing the production schedule and increasing equipment operations, he added.

Despite a 62 percent slump in output in April from the same period last year, the country’s best-selling domestic car brand has not lowered its production target for the year. The plant will produce at full blast over the next few months to realize the goal of making two million units this year, said Yang Hai, head of production management.

But one of the biggest challenges hampering full recovery is a damaged supply chain. The Covid-19 flare-ups in the Yangtze River Delta region, which encompasses Shanghai and the surrounding areas where many of the JV’s parts and raw materials are produced, have affected supply.

Although the situation is much better than in April, when very little could be delivered, replenishing stocks of auto parts is still very hard, Zhang Ming, the firm’s head of procurement, told Yicai Global. We can only guarantee enough supply for one to four days of manufacturing now.

"We are stockpiling raw materials, semi-finished products and finished products in a number of cities, enough to maintain production for one to two weeks in case of unexpected disruptions," Zhang said.

Since the plant reopened at the end of April, FAW-Volkswagen has also been actively involved in helping its suppliers get back to work as much as possible. Every link in the supply chain is required to build up their own reserves as backup, Zhang added.