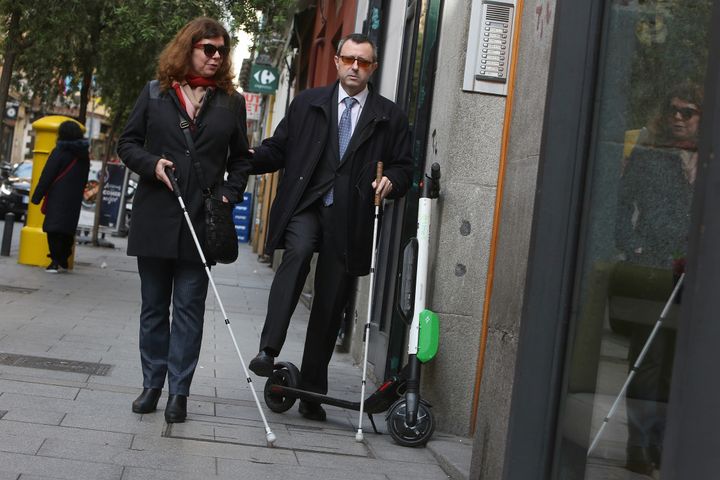 Following a Stroke, a Marketing Manager Creates a "Trip Advisor" for Disabled People

(Yicai Global) June 25 -- Willy Ruiz' stroke occurred while he was giving a presentation on iPhones, iPads and iPods. "I left with my boots on," he jokes. Ruiz had been Apple's marketing manager in Spain for 10 years, but his life changed on that morning in 2013. "Everything was going very fast, and it stopped. Then everything started to go very slowly," he says. He woke up from a coma to a world that was now hostile territory, and where he had to get used to having a brain he no longer controlled. "The first night I slept at home after the stroke, I fell out of bed," he recalls.

But the greatest challenge was in navigating the world outside his home. One night, Ruiz was returning home after eating with some friends in a restaurant in Madrid's city center, when he needed to use a restroom. On a street full of bars, he was unable to find one with wheelchair access. When he finally did, there were three stairs to the restroom. He thought, "Why isn't there an app for me to know where I can go to the bathroom?"

That's when he had the idea for Mapcesible, a mobile app that works as a sort of Trip Advisor for people with reduced mobility. Users rate places, from restaurants to beaches, according to their accessibility. They respond to a questionnaire designed by Ilunion, the foundation of the Spanish Blindness Organization (Organización Nacional de Ciegos Españoles, or ONCE), and can even upload pictures. Another Spanish foundation, Fundación Telefónica, has provided technical and financial support.

"The first tests were conducted by the foundation's volunteers, and we added to the information by incorporating data from dozens of public databases, such as those of municipalities," says Luis Rojo, the foundation's institutional relations director. The platform has gathered information on more than 20,000 places so far.

"You see the city with different eyes. The day we presented the app, a kick scooter was parked in front of the foundation's front door," Rojo says. The tool does not respond only to the needs of the disabled – it is also useful for the elderly or people with baby strollers.

In 2003, Spain passed the Equal Opportunities, Non-Discrimination and Universal Accessibility for People with Disabilities law, which requires that "buildings, areas, tools, equipment and technology, and goods and products" all be inclusive. The law also requires "the removal of access barriers and adaptation of equipment and tools." In 2011, Spain's main disability agencies worked with the Federation of Municipalities and Provinces to produce the largest report to date on mobility, analyzing 70 towns and cities. The study showed, for example, that 90 percent of municipalities had public staircases that did not comply with regulations, 67.6 percent of traffic lights did not have a warning device, and tree grates were broken or defective 70 percent of the time.

"A growing number of technological tools aim to help with mobility, but an app doesn't make a place accessible if the physical barriers are still there," says Jesus Hernandez, director of universal accessibility and innovation at the ONCE foundation, adding that they are working to update the study's data. "We are seeing a change in cities, but it's very slow," he says. ONCE and the Spanish mobile provider Vodafone co-developed Tur4all, an app that lists accessible resources for tourists. The Catalan company Mass Factory launched another tool in 2016 that guides disabled people through the public transport network, and Google maps has integrated an option to show access-friendly places. "Every bit counts, but a building without an elevator is still a prison for a disabled person," Hernandez says. "The problem starts at universities where architecture graduates are not taught to think about adapted designs."

Removing barriers and adapting spaces is not just a matter of inclusion for people with physical disabilities. David Lopez is project coordinator for Afanías, an organization that supports people with mental health conditions. "Everyone, disabled or not, can have difficulty getting around a city, and we all like to be able to arrive safely at our destination without getting lost," he says.

Afanías and researcher Berta Brusilovsky have developed the Easy Space project, in which disabled people and architects work together evaluating the adaptability of places. "There are basic elements to look for – an easily recognizable entrance, a focal point to help people find their way around a building, accessible routes, a directory at the entrance, information wherever two corridors intersect so people don't get lost and can find the exit," Brusilovsky says.

Ruiz mentions a challenge that most people take for granted: "I need to know what I can expect when I go out to the street, and that there will be no surprises."