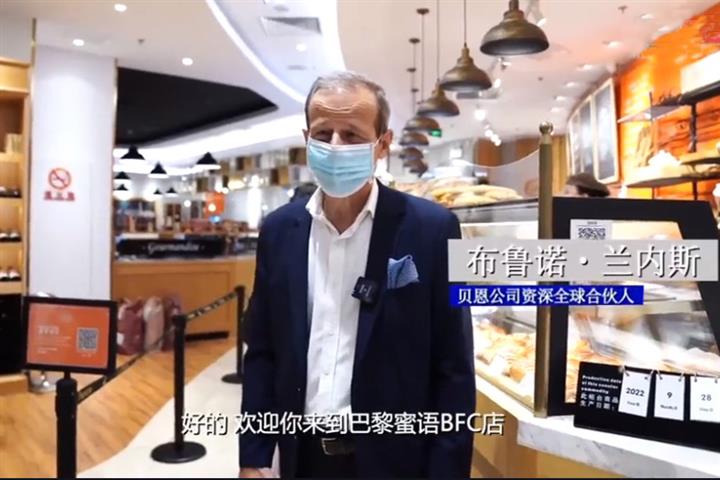 (Yicai Global) Nov. 7 -- A Frenchman who has worked for 16 years in Shanghai as senior global partner at a US management consultancy firm is one of a number of foreigners who see Shanghai as more than their ‘second home’ and are making their mark on the city.

Bruno Lannes, who arrived in Shanghai in 2006 and is now the longest-serving foreign employee at Bain & Company’s Shanghai office, runs an authentic French bakery chain in the city called La Parisienne.

He opened the first outlet in 2015 together with a French baker called Rafael who had come to Shanghai earlier as part of the Paul bakery chain which pulled out a few years later.

“Rafael is my friend and he is a very professional baker. We wanted to preserve the essence of the French bakery,” Lannes told Yicai Global. “At that time there were not many authentic French bakeries in Shanghai, so another investor and I funded this bakery as angel investors.”

As both parties already had a lot of experience in the Chinese market, they didn’t involve any Chinese partners. “Rafael’s wife is from Shanghai, so she can give advice,” Lannes said.

The venture has been such a success that they are now planning on opening their fourth outlet.

Sixteen years ago, Shanghai was not as international as it is today, said Lannes, who has worked for Boston-based Bain for 30 years. There weren’t many luxury brands and the city was not as appealing aesthetically as it is today. The number and quality of restaurants were also far from what they are now.

Today, Shanghai has the most luxury stores and Michelin-starred restaurants in China, Lannes said. It has become a global consumer hub and a ‘first-store’ capital, or the city where international brands open their ‘first store’ in the country.

There were about 300 luxury-brand stores in the metropolis as of the end of 2021, according to Bain data. The concentration of high-end labels in Shanghai has exceeded 90 percent. And as of the end of September, 877 multinational companies had set up their regional headquarters in Shanghai, more than 70 of which are global consumer brands.

China is the world’s largest and most important consumer goods market, Lannes said. And Shanghai has hosted the China International Import Expo for five consecutive years. Categories such as daily necessities and electric vehicles have room for further growth, which will attract more emerging brands in the future.

Home Is Where the Heart Is

“I love this city. I’ve been in Shanghai for 16 years and feel at home here,” Lannes said, despite not speaking the language. “The people of Shanghai impress me with their enthusiasm, positivity and their optimism for the future at all times. I'd love to stay here longer.”

Despite the Covid-19 travel restrictions, Lannes still returns to France twice a year to visit his family. The period of quarantine after each re-entry of China does not put him off from wanting to return to China.

“Today Shanghai is increasingly internationalized, and many times when I walk on the streets of Shanghai, I feel as if I am in Paris,” Lannes said. “I think the change in people's lifestyles is the result of long-term market cultivation.”