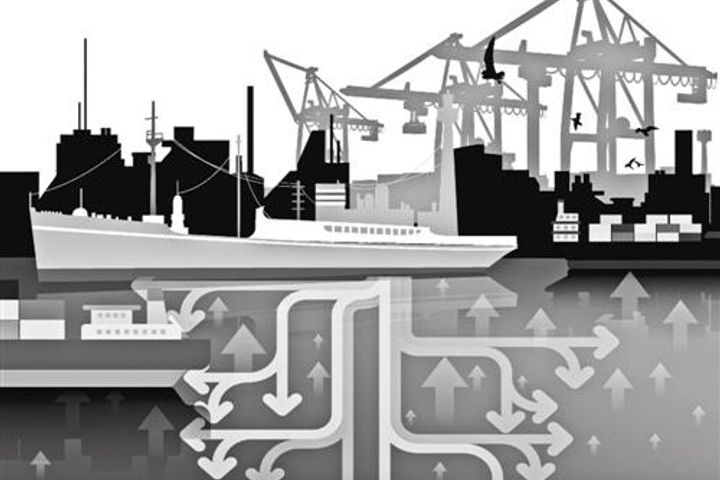 (Yicai Global) Jan. 10 -- A report presented at China's 19th National People's Conference proposed the development of free trade ports to accelerate the economic opening up of the country.

Why should China build free trade ports (FTPs)? What are the differences between FTPs and free trade areas? And which sectors could see trials of the FTP model? Yicai Global interviewed Wei Jianguo, former commerce minister and current vice chairman at think tank China Center for International Economic Exchanges, to find answers to these questions.

Yicai Global: What is the role of FTPs in terms of stimulating the comprehensive opening up of the economy?

Wei Jianguo: The NPC's decision to build an open economy based on new systems sent out a strong signal: China will create the best business environment in the world within five to 10 years, establishing itself as the global leader in international trade and investment liberalization and facilitation.

The ultimate objective of comprehensive economic opening is to enhance the quality of economic development and promote market deregulation in China through the introduction of free trade ports. In other words, FTPs will open a new window for the country's open economy.

Yicai Global: What is the difference in strategic positioning between free trade ports and free trade areas?

Wei Jianguo: Pilot free trade areas and free trade ports have different strategic positioning. The former is defined as a test field, for the creation of best practices before nationwide introduction. By contrast, the latter represents the highest level of economic openness in the world, offering a full range of special policies on market access and financial and taxation systems.

Therefore, FTP should not be viewed as just a redo of the FTA initiative. FTAs are 'middle schools', the purpose of which are to popularize the notion of an open economy, while FTPs are 'postgraduate schools' tasked with creating the most advanced mechanisms for economic liberalization.

Yicai Global: What kind of changes are involved in the transition from FTAs to FTPs?

Wei Jianguo: The biggest difference between the two lies in the fact that reforms in FTAs are mostly limited to goods distribution, and FTPs focus on comprehensive reforms in various areas ranging from goods, currencies and information, and personnel exchanges to legal and regulatory institutions.

Despite the replacement of filing/approval-based administration with 'negative lists' and post-entry regulation, administrative filing is still needed for certain products before they enter an FTA, though they can enter FTPs without filing, giving these ports a unique status -- they are located 'within the national territory but outside customs territory'.

The most crucial changes will come from the government, so local governments need to work more efficiently than their counterparts in Singapore, Hong Kong and Rotterdam to make sure that relevant services are effectively delivered.

Yicai Global: In your opinion, what are the 'software' and 'hardware' conditions required for building free trade ports?

Wei Jianguo: There are six prerequisites for experimenting with the FTP model.

Firstly, free trade ports should be built close to major transportation hubs. High concentrations of goods, capital, people and information flow at FTPs dictate that the ports must have fully developed sea, air and road transportation networks. Both Hong Kong and Singapore are important regional seaports and airports.

Thirdly, FTPs should have high concentrations of multinational high-tech businesses and professionals. This means ports should locate in cities with top-tier higher education and research institutions to ensure sufficient supplies of high-end human resources, and the cities should also have developed industries to attract fully qualified professionals, and retain them with friendly immigration policies and other incentives, as well as a well-developed services industry and attractive living conditions. Both Hong Kong and Singapore have large numbers of prestigious universities and research institutes, providing the cities with valuable sources of fully-trained professionals every year.

Fourthly, government agencies running free trade ports should act authoritatively and be capable of providing effective management and other services, and FTP operation institutions should be market-oriented and highly efficient in their operations. Fully market-based operation companies manage the ports in New York and Singapore, with the government acting as supervisor and regulator.

Fifthly, a complete international service system must support FTPs, consisting of financial and legal service agencies and global production and household service providers to cope with growing flows of goods and population.

Lastly, FTPs should offer the best business environment in the world. This requirement is threefold: (i) thorough intellectual property protection; (ii) equal rights, rules and opportunities for all businesses; (iii) an impartial and transparent legal environment that guarantees consistency in various policies.

Wei Jianguo: Through "deregulation on the frontline", FTPs will take the openness of the economy to a new level, and "regulation on the second line" mainly involves tax, administrative fee and fiscal regulation, as is the case with all other free trade ports in the world.

Efforts of FTP development should be confined to a small number of cities with suitable local conditions. High-quality free trade ports will be first built in these areas, but the number and sizes of the ports will be limited, because it is unrealistic to expect to turn the whole country or entire provinces into FTPs. It will take time to build an open economy.

Reforms Should Be Proactive Rather Than Reactive

Yicai Global: How does China compare with the existing free trade ports in the world? Where does China need to make the biggest improvement?

Wei Jianguo: I think the biggest difference is in our perception, especially how we design free trade ports at the top level. The development of a socialist society with Chinese characteristics has entered a new era where reforms must be implemented following a 'top level' design.

Building free trade ports requires the support of local governments. It may involve changing the existing administrative division, which in turn makes it necessary to reform various government departments. For example, reforms of the financial sector, capital account regulation and exchange rate formation and population movement require that the public security authorities be transformed in the first place, and free flow of goods cannot be achieved without reforms in customs, commercial administration, development and reform planning, taxation, fiscal and import-export inspection. All these dictate that relevant changes should be introduced in a top-down fashion.

Relative to the establishment of the 11 free trade areas, the top-level design is more important for FTP development, because free trade ports must be able to boost manufacturing and service industry development, as well as attracting corporate headquarters. It is an open economic development model that covers multiple sectors.

However, our plan must take the current situation into consideration. How can we achieve the highest level of free trade? It requires concerted efforts by all departments, the legislature and policymakers. Following the introduction of the free trade port program as a national strategy, relevant reforms must be accelerated. Instead of reactively implemented, the government should proactively drive the reforms on a comprehensive scale and at deeper levels.