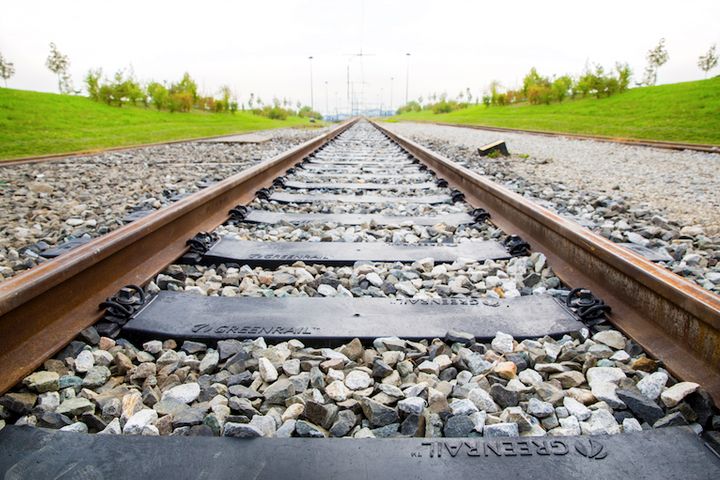 (Yicai Global) Dec. 3 -- Giovanni De Lisi was a 20-year-old railway maintenance and installation worker near Palermo, Italy, when he had his revolutionary idea in 2005. Working under the Mediterranean sun, he had an intuition that could shake up a century-old railway system and drive it towards a sustainable future.

At the start of the 20th century, concrete railway sleepers started to replace the older wooden ones, and have since remained the industry standard around the world. De Lisi's idea was simple: cover the concrete sleepers with a blend of plastic and rubber from used tyres to improve their efficiency. Six years ago, the idea led to the creation of Greenrail, a Milan-based startup supported by Polihub, a business incubator at the Polytechnic University of Milan.

Secondary raw materials – a mix of recycled plastic and rubber from end-of-life tyres collected by the Italian association EcoPneus – became the basis for a system that could turn an old, inanimate railway network into a living infrastructure capable of producing energy, recording and sending data, and detecting potential issues with trains. "The concrete core maintains the same mechanical properties as traditional sleepers," Greenrail CEO and founder De Lisi explains. "But the plastic and recycled rubber cover helps to reduce the grinding of the track ballast, to absorb vibrations, curb the rails' lateral displacement, and bolster the load capacity by 40 percent." In turn, it lowers network maintenance costs by 50 percent, and causes the sleepers to last up to 50 years longer than their traditional 40-year lifespan. More important, the new sleepers re-use up to 35 tonnes of highly polluting end-of-life tyres, traditionally difficult to recycle, per kilometre of railroad.

Now that the research and development phase is complete, Greenrail is gearing up to start production and enter a global market in which 120 to 140 million sleepers are replaced every year for ordinary maintenance. "Every market has its own local producers," says De Lisi. "We offer a global innovation covered by 85 patents across the world." He highlights that Greenrail's sleepers offer "highly customisable products, depending on the local operators' network, gauge, load capacity, and technical requirements."

The marketing plan was launched last year in the United States, where Greenrail has signed licensing agreements in five states thanks to a 75-million-euro deal with American company SafePower1, which will commercialise the product locally. The Italian company is currently raising funds to build a dedicated production plant for the US market. De Lisi, who owns nearly 90 percent of the company's shares while his original partners control the rest, is also looking for funds to build a production plant in Italy, which he expects to be fully functional by 2019.

For the first three years, Greenrail's investments were channelled into research and development through its partner companies and some 30 researchers from the Polytechnic University of Milan working alongside the company's 14 employees. Now it will start the operative phase. Aside from its activity in the US, Greenrail is currently negotiating an expansion into high-potential markets such as India, Australia, Brazil, Russia, Uganda and Kazakhstan.

Meanwhile, research continues. Railway sleepers still play an essentially passive role and are inactive 90 to 95 percent of the time. They will now have the potential to become active and "smart." Greenrail's solar version turns a railway network into a solar power station by integrating 35-45-megawatt hours per year photovoltaic modules into the sleepers, allowing them to power the train network, stations, switches and traffic lights, and to send electricity to the general power grid. Each kilometre of Greenrail's solar sleepers can produce enough power to sustain 10 households' annual electricity needs.

Another model, called LinkBox, can record and send data, building a live interconnected system for diagnostics, safety and predictive maintenance. To develop this model, Greenrail signed an agreement with Spanish technology and consulting giant Indra to build a smart control unit able to collect data on th

e status of railways and trains and to send it live to traffic control centres. The system uses high precision sensors and machine learning to continuously improve its accuracy and prevent serious issues.

"Our goal is to keep working to improve the efficiency of materials and entire networks," says De Lisi. Since September, his company's new generation smart sleepers have been used in a pilot section of the Italian line Reggio Emilia, in the Emilia Romagna region, exploring new frontiers of big data and smart connectivity. De Lisi's brilliant idea has turned into a sustainable, safer and more energy-efficient journey.