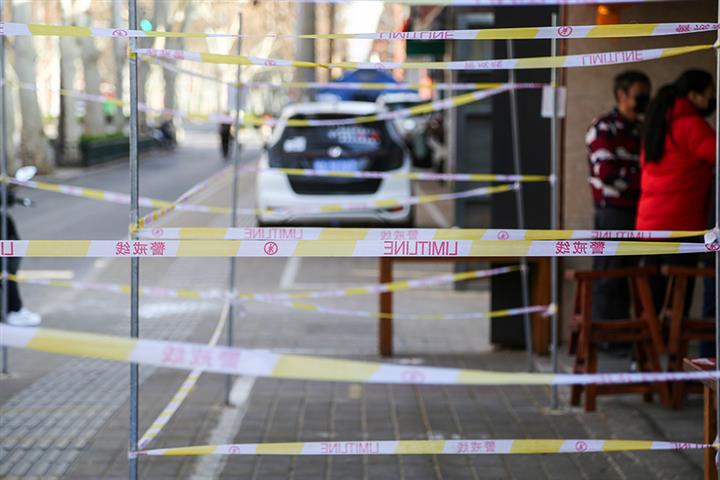 (Yicai Global) April 16 -- The novel coronavirus pandemic is a truly global crisis as no country has been spared, making the Great Lockdown the worst economic recession since the Great Depression, the International Monetary Fund said in a new report.

Global growth is expected to fall 3 percent this year, according to the IMF’s World Economic Outlook published on April 14. That’s 6.3 percentage points lower than the Washington-based lender’s forecast made in January.

If the pandemic peaks in the second quarter for most countries and recedes in the second half, the US economy is expected to contract by 5.9 percent this year and expand by 4.7 percent next year. The European Union’s economy will shrink 7.5 percent this year and grow 4.7 percent in 2021, while China’s is projected to grow 1.2 percent and 9 percent over the two years.

These scenarios could be worse if the pandemic lasts longer.

“This is a crisis like no other, and there is substantial uncertainty about its impact on people’s lives and livelihoods,” the IMF noted.

“A lot depends on the epidemiology of the virus, the effectiveness of containment measures, and the development of therapeutics and vaccines, all of which are hard to predict,” the report said. “In addition, many countries now face multiple crises -- a health crisis, a financial crisis, and a collapse in commodity prices, which interact in complex ways.”

Policymakers are providing unprecedented support to households, businesses, and financial markets, and while this is crucial for a strong recovery, there is considerable uncertainty about what the economic landscape will look like when the world emerges from this lockdown, the report said.

If the pandemic recedes in the second half of this year and if policy actions taken around the world are effective in preventing widespread corporate bankruptcies, job losses, and system-wide financial strains, the IMF sees global growth rebounding next year to 5.8 percent.

A recovery in 2021 will be only partial as the level of economic activity is projected to remain below what the IMF had previously projected for 2021, before the virus hit. The cumulative loss to global gross domestic product this year and next from the pandemic could be around USD9 trillion, which is more than the economies of Japan and Germany combined.

What the IMF has described is a baseline scenario, but given the extreme uncertainty around the duration and intensity of the health crisis, the organization has also explored alternative, more adverse scenarios.

The pandemic may not wane in the second half of this year, leading to longer durations of containment, worsening financial conditions, and further breakdowns of global supply chains. In such an eventuality, global GDP would fall even further: an additional 3 percent in 2020 if the pandemic is more protracted this year, and if the pandemic continues into 2021, it may fall next year by an extra 8 percent compared with the IMF’s baseline scenario, it said.

Holding back the spread of Covid-19 via lockdowns allows healthcare systems to cope with the disease, which then permits a resumption of economic activity. In this sense, there is no trade-off between saving lives and saving livelihoods, the report said.

Countries should continue to spend generously on their healthcare systems, carry out widespread testing, and not restrict trade in medical supplies. A global effort must ensure that when therapies and vaccines are developed both rich and poor nations alike have immediate access, the IMF said.

While the economy is shut down, policymakers will need to ensure that people are able to meet their needs and that businesses can pick up once the acute phase of the pandemic passes.

The large, timely, and targeted, fiscal, monetary, and financial policies already taken by many policymakers -- including credit guarantees, liquidity facilities, loan forbearance, expanded jobless insurance, enhanced benefits, and tax relief -- have been lifelines to households and businesses. This support should continue throughout the containment phase to minimize persistent scars that could emerge from subdued investment and job losses in this severe downturn.

Policymakers must also plan for the recovery, the report added. As containment measures come off, policies should shift swiftly to supporting demand, incentivizing hiring, and repairing balance sheets in the private and public sectors to aid the recovery. Fiscal stimulus that is coordinated across countries with fiscal space will magnify benefits for all economies. Moratoriums on debt repayments and debt restructuring may need to be continued during the recovery phase, the IMF said.

Multilateral cooperation is vital to the health of the global recovery. To support needed spending in developing countries, bilateral creditors and international financial institutions should provide concessional financing, grants, and debt relief. The activation and formation of swap lines between major central banks has helped ease international liquidity shortages, and may need to be expanded to more economies. Collaborative efforts are needed to ensure that the world does not de-globalize, so the recovery is not damaged by further losses to productivity.

The IMF is actively deploying its USD1 trillion lending capacity to support vulnerable countries, including through rapid-disbursing emergency financing and debt servicing relief to its poorest member countries, and it is calling on official creditors to do the same, it said.

There are some hopeful signs that this crisis will end, the report added. Countries are succeeding in containing the virus using social-distancing practices, testing, and contact tracing, at least for now, and treatments and vaccines may develop sooner than expected.

A global crisis as seen in 2008 is not likely to happen, with the current financial leverage generally under control and a sound bank capital adequacy ratio. But potential risks and pressure on lenders’ asset quality cannot be ignored, the report noted.

The IMF issued a warning on the quality of bank assets. Overall, banks should take the cost of restructuring loans through capital retention buffers or by releasing counter-cyclical capital buffers.

“We should closely monitor the quality of banks’ assets to see if financial support [equity injections] are needed, especially if the economic downturn continues,” the IMF said. Banks worldwide must take up this challenge.

Fiscal and financial measures to fight the pandemic, whether it is helicoptering money, giving basic income or issuing Covid-19 bonds, will lead to central banks cutting government debts, according to Yicai Research Institute, a sister think tank of Yicai Global. This brings moral risk to central banks and demands more independence from them.