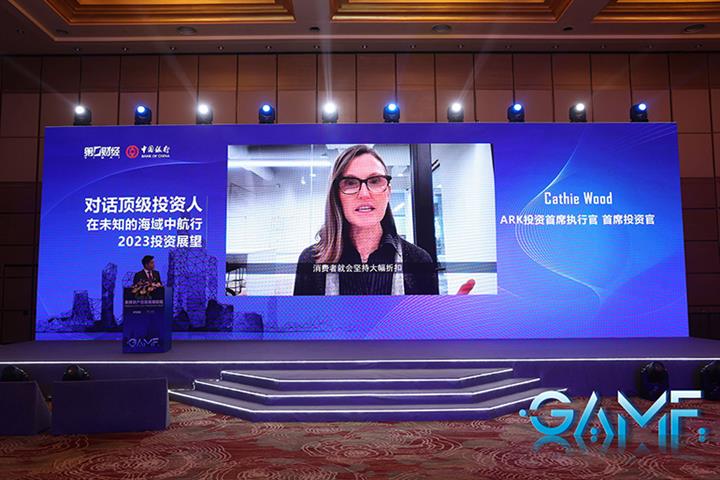 (Yicai Global) Nov. 29 -- Deflationary forces will work their way through the system, and as a result growth companies will shine in a period when the global economy is under pressure, according to Ark Invest founder Cathie Wood.

All kinds of innovation help consumers and businesses as the economy goes through a recessionary period and the superior growth characteristics of innovation-based companies shines through, Wood, who is also chief executive of Ark Invest, a New York-based investment manager, told the 2022 Shanghai Global Asset Management Forum today.

The last year and a half have been difficult because inflation and interest rates have gone up much more than expected, Wood said. But she believes the cycle is coming to an end because deflation in pipeline commodity prices, both in the upstream and the downstream, is declining.

“We would not be surprised to see it drop below 2 percent and maybe even below zero for a time as some of these deflationary forces work their way through the system,” Wood noted. Enterprises with growth strategies, including innovation-based strategies, are hurt the most by rising inflation and interest rates, while helped the most by lower inflation and interest rates.

“When the Federal Reserve pivots with its rhetoric and actual interest rates decline, we believe we’re in a recession,” said Wood. “And we believe that growth companies, with rising revenue and cash flow numbers, are going to shine in a period where the economy is under pressure.”